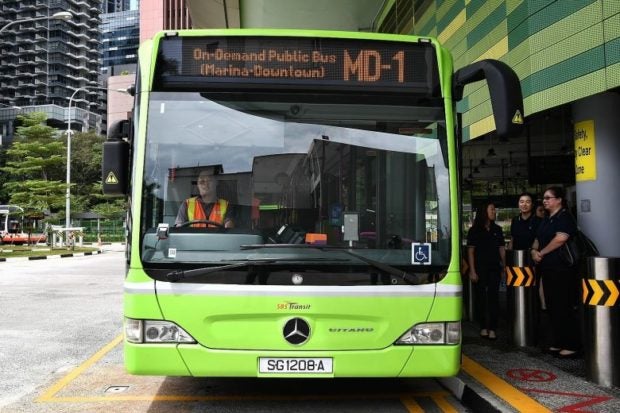 SINGAPORE — The city-state has embarked on a new public transportation trial that will see people hail a bus the way they would hail a private-hire ride.

From Dec 17, commuters in Joo Koon and Marina Downtown can hail a public bus the way they hail a private-hire ride.

As part of a six-month trial, they will be able to book an SBS Transit service via a phone app, requesting pick-ups and drop-offs at any bus stop within the two areas.

The fare will be based on a distance of 3.2 km, which is currently 77 cents for the adult fare card and 83 cents from Dec 29, when the latest fare revision kicks in.

Commuters will be issued an e-boarding pass once a booking is successful.

They pay for their ride the usual way – by tapping their ez-link card.

And, from Jan 4, another on-demand bus service will be available from the Central Business District (CBD) to Bedok and Tampines.

SMRT will ply this service on Fridays, Saturdays and eve of public holidays from 11:30 pm to 2 am.

The app for the Marina Downtown and CBD-Bedok-Tampines services is BusNow, provided by home-grown Swat. The app for the Joo Koon service is BusGo, by American company Via.

The Land Transport Authority (LTA) said regular bus services will still be available but at a lower frequency during the six-month trial of the new on-demand bus service.

The LTA said buses which are freed up from the lower frequency schedule will be deployed as on-demand buses.

Swat and Via clinched a $2.26 million contract early this year to conduct the six-month trial.

Senior Minister of State for Transport Janil Puthucheary, who took a demo ride yesterday, said: “We’re experimenting with a new form of public transport to see if we can optimise the opportunities for commuters.

“We need to experiment with a few models of public transport to find out what people need, what people want. We certainly hope to try this in other areas… A lot will depend on how commuters react.”

Retiree Anthony Ng, 68, said he would give it a go.

Mr Ng, however, noted that the cost must be low enough, and that the buses must not be too crowded.