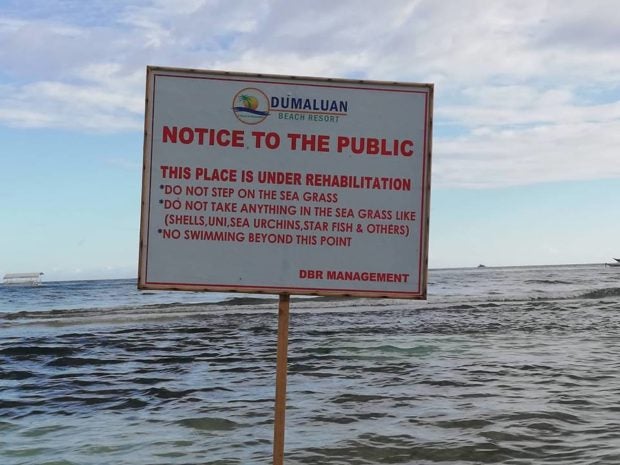 Signs were put up at a resort in Barangay Bolod in Panglao Island as part of the resort owner’s rehabilitation. Tourists are not allowed to swim and collect marine lives. (Photo by LEO UDTOHAN / Inquirer Visayas)

The island, considered the crown jewel of Bohol’s tourism, is composed of the towns of Panglao and Dauis.

The town’s mayor, Leonila Paredes-Montero, however, said the water quality test results were far from alarming.

“Panglao seas are safe for swimming and bathing,” she said on station DYRD’s Tagbilaran By Nite on Monday night.

She said the latest water quality of Panglao coastal waters as of November conducted by the Environmental Management Bureau (EMB), an agency attached to the Department of Environment and Natural Resources, showed that the coliform level on Alona Beach was only 33 most probable number (mpn), way below the acceptable level of 100 mpn.

The results were presented to Montero on Monday by the EMB-Bohol and Bohol provincial health office personnel.

The test registered the coliform level of below 100 mpn/per 100 milliliters (ml) in Tawala 1 to which Alona Beach belongs, which is safe for the public as opposed to the October 2018 of 16,000 mpn/100 ml which prompted the DOT to declare the waters on Alona Beach unsafe for swimming.

Montero hoped that the DOT would reverse its pronouncement on Alona Beach.

Despite the warning from DOT, tourists were found swimming since Saturday on Alona Beach, the day after Tourism Secretary Bernadette Romulo-Puyat confirmed unsafe levels of bacteria.

Coliform is a type of bacteria that comes from human or animal feces. It often causes diarrhea and other water-borne diseases that can be fatal to malnourished children.

Puyat said the government has ordered a swimming ban on two beaches in Panglao and El Nido, Palawan.

She said tourists and locals would not be allowed to swim in Alona Beach and at El Nido’s Buena Suerte beach because of “high coliform level.”

Puyat said the coliform levels in the two beaches have exceeded the acceptable coliform count of 100 most probable number (mpn).

She said the ban on the said beaches would be imposed “until the coliform levels are acceptable.”

Puyat said the ban is part of the ongoing rehabilitation of El Nido and Panglao.

Cimatu had given owners of the illegal structures on Panglao Island six months to demolish these or charges would be filed against them.

During the visit, Cimatu didn’t inspect the septic tanks and wastewater facilities of the establishments in Panglao.

The DENR earlier identified the lack of septic treatment facility and “bottomless” septic tanks as among the problems contributing to the environmental woes of the island.

But for Mike Schells, a tourist from Surrey, England, since there was no swimming advisory on Alona Beach, he loved to swim in the clear water.

“We were not informed,” he said on the coliform issue. He said the only concern he had was he could not swim because of many boats docking on the beach.

“Boats all over! I hope the management could find another place for the boats to dock and make this a real swimming beach,” he said.

There were signages in the area to warn swimmers that the water was not safe for swimming.

“Still the water looks clear and clean like we still have fun here,” Schells added.

In Barangay Bolod, although there was no high level of coliform reported in the area, a resort here put signages to warn tourist from swimming and collecting marine lives.

Anthony Ceniza, supervisor of Dumaluan Beach Resort II, told the Inquirer that the signages were put on the sand to warn tourists that the place was under rehabilitation.

“We voluntarily `rehabilitate our place as part of our responsibility to take care of our environment that gives us a livelihood,” he said.

The resort’s workers put the signages in front of the property from 5 a.m. until 5 p.m.

Ceniza said they set a limit in the area where tourists could swim. Beyond the buoyant materials, they were not allowed to swim further, he said.

Tourists were not allowed to step on the seagrass, to take anything like sea grass, shells, sea urchins and starfish.

Like Boracay, Panglao is suffering from environmental problems because of unregulated development, lax enforcement of laws, and continued surge in tourist arrivals.