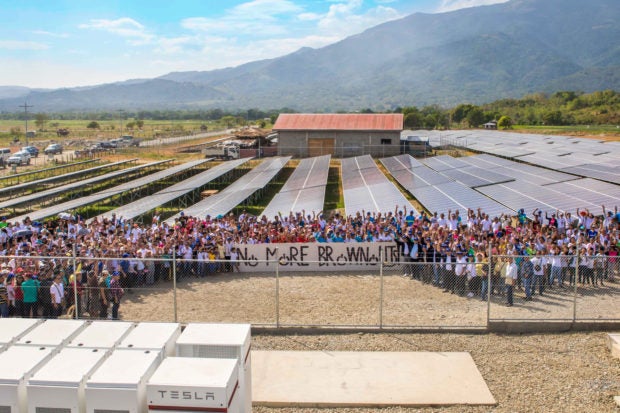 “No More Brownouts”: Residents of Paluan, Occidental Mindoro, celebrate Solar Para Sa Bayan’s completion of the largest solar-battery minigrid in Southeast Asia, bringing 24/7 power for the first time in the town’s history, at less than 50% the cost of the local electric cooperative. Solar Para Sa Bayan is now present in 12 towns in provinces including Mindoro, Palawan, Masbate, Aurora, and Cagayan, to benefit 200,000 Filipinos in 2018, the first time so many will get electricity at zero cost to government. CONTRIBUTED PHOTO

The chamber voted to approve on second reading via viva voce or voice voting House Bill No. 8179 or an act granting the SPSB a 25-year franchise to construct, install, establish, operate, and maintain distributable power technologies and mini-grid systems throughout the Philippines to improve access to sustainable energy.

The company has applied for a franchise to extend its services to other parts of the Philippines that want alternative choices for electric service and to help the Department of Energy (DOE) achieve its goal of 100 percent electrification through affordable and reliable electricity for all Filipinos by 2022.

In an interview at the Batasang Pambansa Complex, Leviste expressed hopes that “public interest would prevail over the interest of the few.”

Leviste also debunked allegations that the grant of the franchise to his company was bound to create a monopoly.

“The allegations being thrown are completely false… The bill has always had a non-exclusivity clause in it and inulit na nga sa other parts of the bill,” he told reporters.

“The Constitution itself says no franchise should be exclusive so even if it were, it would be stricken down in courts… There is no legitimate argument against depriving Filipinos of choice,” he added.

Several lawmakers have blocked the committee-level approval of the proposed measure, which they claimed permits an “unconstitutional super franchise” to SPSB.

Yap earlier said the measure was consistent with a 2005 Supreme Court decision declaring unconstitutional the grant of exclusive franchises to public utilities. He also said the bill has provisions barring SPSB from selling, leasing, and transferring its franchise. /kga