WATCH: Vandal urinates on 2 angel statues before smashing them 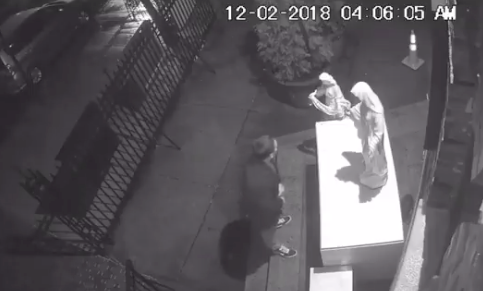 The police in New York, United States is currently on the hunt for a man who urinated on two angel statues before smashing them on the ground.

A man was filmed vandalizing the religious statues in front of Our Lady of Consolation Roman Catholic Church at around 4 a.m. on Sunday, Dec. 2, as seen on the CCTV footage posted by the New York Police Department (NYPD) via Twitter yesterday, Dec. 3.

The vandal, who was described as having short, brown hair and approximately 6 feet tall in height and 190 pounds in weight, was believed to be around 30 years old.

🚨WANTED FOR CRIMINAL MISCHIEF: The suspect urinated on 2 religious angel statues at Our Lady of Consolation Roman Catholic Church (184 Metropolitan Ave) in #Brooklyn and pushed them over. Male, 30s, 6’0”, 190 lbs with short brown hair. Call @NYPDTips at #800577TIPS with info. pic.twitter.com/793RF3q5EI

The security camera first showed the man standing near the figures with his hands on his crotch. He was later captured pushing the two angel statues to the ground, smashing them in the process.

The vandal then walked away as if nothing happened.

The broken sculptures were discovered by the church’s pastor at 6 a.m. on the same day, as per the New York Post yesterday, Dec. 3. Apparently, it was not the first time the angel statues were targeted.

In 2016, one of the angels was destroyed by a group of suspects. Earlier this year, a different suspect vandalized the same statues, although no police report was filed.

The NYPD is now investigating the incident as a possible hate crime, since the church is largely attended by the Polish community. They are yet to identify the current suspect, as of this writing. JB