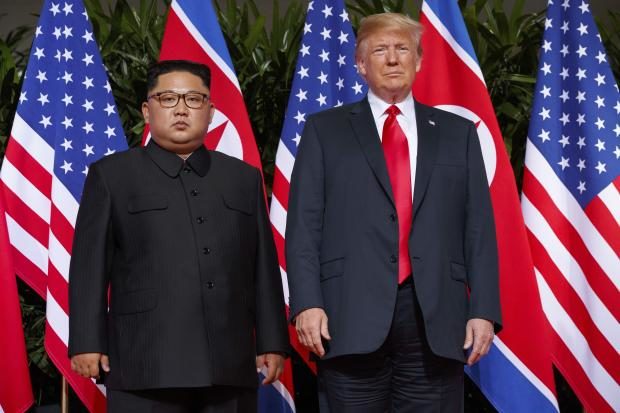 SEOUL – The momentum for a second US-North Korea summit early next year and North Korean leader Kim Jong-un’s visit to Seoul has been kept alive through a flurry of diplomacy on the sidelines of the G-20 summit.

But North Korea has chosen to stay mum, which analysts say indicates a deepening dilemma for the young leader under pressure to prove he was right about offering to give up his country’s nuclear weapons program.

The US and South Korea’s often repeated statement that sanctions against North Korea must remain in place until Pyongyang completely denuclearizes could be a reason behind the North’s hesitance in moving forward on denuclearization talks with the US, analysts say.

A year after North Korea imposed a de-facto moratorium on nuclear and missile tests, Kim might have expected to win at least partial sanctions relief from the US by now. In reality, denuclearization talks between North Korea and the US have been at a stalemate.

North Korea has demanded the US take “corresponding measures” — which seem to include an end-of-war declaration and sanctions relief — to build trust and improve relations before it further denuclearizes.

The US, on the other hand, has demanded North Korea take more irreversible steps toward denuclearization before it receives any rewards.

Without signs of imminent economic benefits from the US, Kim lacks justification to persuade his people to give up the country’s nuclear weapons program, and there is no turning back for Kim, an expert said.

“The young leader may be facing pressure to prove he made the right choice about giving up the country’s nuclear weapons,” said Cho Han-bum, a senior researcher at the Korea Institute for National Unification.

Ending a year of threats and hostilities against South Korea and the US, Kim went on an extensive diplomatic offensive this year, meeting South Korean President Moon Jae-in three times, holding a summit with Trump and trying to mend soured ties with its traditional ally China.

In April, Kim signaled the end of Byungjin policy — the parallel pursuit of nuclear weapons and economic development — and adopted a new policy line aimed at focusing on developing the economy, which experts say was aimed at laying the groundwork for negotiating away its nuclear weapons.

At the June 12 summit with Trump, Kim committed to work toward “complete denuclearization of the Korean Peninsula. He even had Moon address some 150,000 residents in Pyongyang in September, during which Moon reaffirmed Kim’s commitment to denuclearization.

“There are now high expectations within North Korea that an improvement in inter-Korean relations and ongoing negotiations with the US will positively affect the North’s economy,” Cho said.

With the US adamant that sanctions be maintained against the North until substantial denuclearization, Kim faces difficulties in realizing his promise to his people, he said.

“North Korea cannot pull out of negotiations, but it cannot make advances in the denuclearization talks without being confident that it would lead to an economic development,” Cho said. “North Korea might need to see at least a sign of sanctions relief as it takes steps toward denuclearization.”

Kim dismantled a major nuclear test site in Punggye-ri in the presence of international journalists, returned the remains of US veterans killed during the 1950-53 Korean War and repatriated three US citizens who had been detained in the North.

But the measures are not seen as credible steps toward denuclearization in the eyes of Washington, which is why the US remains skeptical and reluctant to make concessions, such as the easing of sanctions.

Kim Young-hui, who defected to South Korea in 2002 and works as a research fellow at a state-run bank, said the third-generation dictator is different from his father and grandfather, and more conscious of how North Korean people see him.

“North Koreans had to endure long years of hunger for the country’s development of nuclear weapons — which was supposed to protect the country from attacks by the US,” she said. “But why should they give them up now? What can they gain in return? North Koreans need to be assured that the war is now over and that they don’t have to be worried about the US aggressions.”

“Kim might be carefully pondering what step he should take next as he feels that there is nothing he can gain from the negotiations.”

Moon and Kim promised to declare an end to the Korean War within the year, but the US has been reluctant to do so without progress in denuclearization. The North has moved away from calling for the end-of-war declaration to demanding the lifting of sanctions.

Experts are divided on the impact of international sanctions on North Korea’s economy largely due to a lack of data, but analysts seem to agree that sanctions have taken a toll on the North to some extent.

North Korea has managed to keep its market prices and foreign currency exchange rate relatively stable, but that could soon be destabilized by a lack of signs of imminent sanctions relief, according to a report by the Institute for National Security Strategy.

North Korea’s foreign currency reserves held by those involved in market activities are keeping the economy afloat and offset the short-term impact of international sanctions against North Korea, according to Lim Soo-ho, a senior research fellow at the INSS.

There are about 450 markets in operation, where North Koreans trade agricultural products and consumer goods, an element of capitalism unofficially embraced by Kim since he took power in 2011.

“Economic players in North Korea are spending their dollars amid the expectation that sanctions could be eased, but foreign reserves in the North are highly likely to begin drying up next year if the deadlock in North Korea-US negotiations continues,” he said.

In the long term, sanctions — which ban imports of machinery and electricity, and limit imports of oil — will put the brakes on the North’s booming construction projects, such as its landmark Wonsan-Kalma coastal tourism project along the country’s east coast, according to the report.

But such a “reckless” way of keeping the economy afloat would not likely last long, according to Ko Myong-hyun, a research fellow at the Asian Institute for Policy Studies.

“North Korea is recklessly running its economy by using foreign reserves to promote domestic spending to minimize the negative impact of international sanctions against it,” Ko said.

This year, North Korea’s annual growth was negative 3.5 percent, according to figures released this July by the Bank of Korea. Annual growth is expected to be negative again next year.

North Korea has increasingly shown its frustration about sanctions. Through state-controlled media, North Korea even hinted at a return to the Byungjin policy, amid the continued diplomatic deadlock.

“It seems difficult for North Korea’s economy to be maintained in the coming years without sanctions relief. What is also worrying for the North is that it will take some time for sanctions relief to take effect,” Ko said. “For now, Kim appears to be waiting for Trump to get back to him with a better offer.”