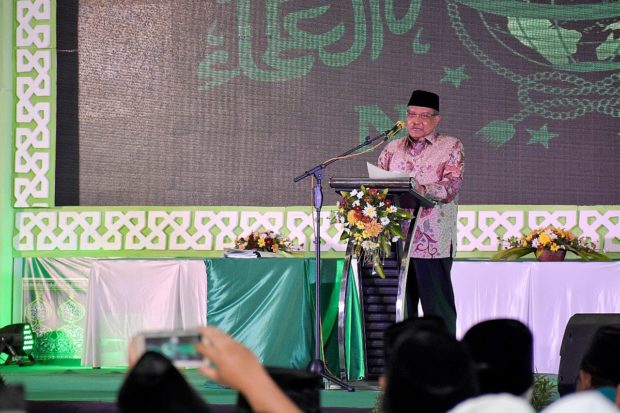 JAKARTA – Indonesia’s largest Islamic organization, Nahdlatul Ulama (NU), has demanded the Kingdom of Saudi Arabia’s ambassador to Indonesia be recalled from the country following his controversial tweet about a rally organized in Jakarta on Sunday by Islamists groups.

“[We] urge the Indonesian government to send a diplomatic note to the Saudi Arabian government to recall the ambassador, Usamah Muhammad Al-Syuaiby, as punishment for his reckless move to interfere in a matter of national politics,” NU chairman Said Aqil Siradj said in a press briefing on Monday.

On Sunday, a group calling itself the “212 Rally Alumni” organized a mass rally at the National Monument (Monas) in Jakarta to commemorate the second anniversary of the 2016 rally that demanded then Jakarta governor Basuki “Ahok” Tjahaja Purnama be prosecuted for blasphemy. Ahok was subsequently convicted and imprisoned.

Hours after the rally on Sunday, Ambassador Usamah posted photos of the rally on his Twitter account, @Os_alshuibi, accompanied by a caption in Arabic, which could be translated as: “The action of millions of Muslims as a reaction to the burning of a flag bearing the tawhid text by a deviant organization.”

The tweet referred to an incident in October, in which members of the NU’s youth wing, Banser, burned a flag that had an Islamic text on it.

The tweet had been deleted on Monday afternoon but it sparked protests from the central board of the NU, the parent organization of Banser.

The NU’s Said also accused the ambassador of intentionally spreading slander in alleging the flag burning was done by members of a “jamaah al-muharifah”, which means deviant organization. The NU chairman said the “rogue members” of the organization had been duly punished. “We also have regretted the burning.”

Said lambasted the ambassador, saying he had committed a “serious diplomatic violation” by getting involved in internal Indonesian affairs, in violation of his authority. “This clearly undermines Indonesia-Saudi Arabia relations,” he went on.

Ahmad Suryana, a communication staffer at the Embassy of the Kingdom of Saudi Arabia in Jakarta, told journalists on Monday that the embassy had yet to make any comment about the ambassador’s tweet. “We will let you know tomorrow,” he said.