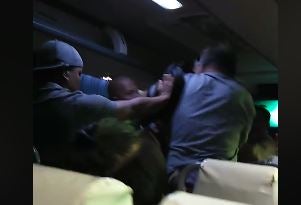 A passenger who was vaping inside a Saint Rose Transit Inc. bus was captured punching the conductor after he was told to get off the bus. The incident happened last Nov. 30, Friday, around 5:30 p.m. and was recorded on video by witness and passenger Mera Lyka Timan.

Timan shared her video on Facebook where it has quickly garnered over 400,000 views and almost 5,000 shares, as of writing. Timan told INQUIRER.net today, Dec. 4, that the incident transpired along Commonwealth Avenue in Quezon City, Metro Manila. The bus was en route to Pacita Complex in San Pedro, Laguna from SM Fairview.

INQUIRER.net has reached out to Saint Rose Transit Inc. for comment.

“While we’re in the part of Luzon Ave., the conductor asked who among the passengers was using the vape,” she told INQUIRER.net. “He said that whoever it is, please alight the bus because there are a lot of passengers who are being affected by the smoke of the vape.”

The conductor, as per Timan’s narration, walked to the back of the bus where a guy sitting in the back seat stood up and said he would be alighting.

As the passenger made his way to the front of the bus, he uttered to the conductor, “Binabadtrip mo ‘ko bababa na ‘ko. (You are pissing me off, I’m going down).”

“The conductor said, ‘Anong sabi mo? (What did you say?)'” said Timan. “[He] went in front but before he could even confront the guy, the guy already started to punch him.”

In Timan’s video, bus passengers can be heard screaming as the brawl ensued. Others can be heard suggesting to call the police, while some cursed and heckled at the passenger to get off the bus. The conductor and passenger alighted and continued the scuffle outside, in front of the Philippine National Bank in PHILCOA.

Timan added that there were no police officers in sight and it was the bus driver who tried to pacify the situation. The identities of both the conductor and the vaping passenger, thus far, remain unknown. NVG