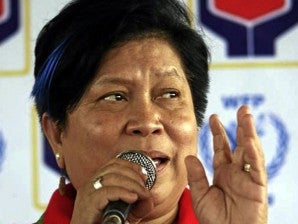 Secretary Corazon Soliman of the DSWD, which implements the CCT program, earlier said the department had been cleaning up the list of beneficiaries and had put in place a system to monitor compliance with the conditions of the cash assistance. INQUIRER file photo/ Jeoffrey Maitem

It isn’t smooth sailing for the government’s conditional cash transfer (CCT) program, with state auditors finding that cash allowances had been provided to families who were not among the poorest of the poor.

The Commission on Audit (COA) also noted that there were discrepancies on the list of beneficiaries, among other lapses.

The agency listed the discrepancies in the CCT program—also known as Pantawid Pamilyang Pilipino Program—in its 2010 report on projects funded by official development assistance (ODA).

The CCT had a budget of P10 billion in 2010 for 1 million households. The Aquino administration expanded the program’s budget to P21 billion and the coverage to 2.3 million families in 2011. It intends to further increase the budget and the number of beneficiaries in 2012.

Secretary Corazon Soliman of the Department of Social Welfare and Development (DSWD), which implements the program, earlier said the department had been cleaning up the list of beneficiaries and had put in place a system to monitor compliance with the conditions of the cash assistance.

In exchange for cash grants of up to P1,400 (P500 per mother and P300 per child up to three), household beneficiaries are required to bring their children aged up to 5 years to health centers for immunization and weight monitoring.

Pregnant women must avail themselves of pre- and post-natal care, and delivery must be assisted by  skilled health personnel. Children aged up to 14 should stay in school and maintain class attendance of at least 85 percent each month.

In its report on the ODA, the COA said the factors used by the DSWD in the survey of poor households were insufficient to determine the economic conditions of potential beneficiaries, as these lacked information on household income.

This resulted in some families being included in the program even though they were not among the poorest of the poor, the COA said.

The DSWD had also failed to validate household data, which resulted in discrepancies in the names of grantees and which could affect the implementation of other social protection programs.

The COA also found double entries in the list of beneficiaries, which exposed government funds to possible losses or misuse.

The double entries also led to the accumulation of P19.47 million in idle funds for over-the-counter payments.

The COA also learned that funds totaling P363.31 million were transferred to Land Bank of the Philippines without corresponding and actual beneficiaries, leaving the huge amount lying idle and affecting the regularity of disbursements, it also said.

Another P192.33 million was released to beneficiaries even though they did not meet the requirements of the compliance verification system, while P9.9 million in educational benefits were overpaid because they were provided to unqualified beneficiaries.

And by the end of 2010, P6.64 billion, released to Landbank for the payment of the cash transfers, were unliquidated, the COA said.

The DSWD had not compelled the Landbank to release the liquidation reports, the COA said.

It also noted that the DSWD had not decentralized the management of fund disbursements by the end of 2010. The centralized system made the validation of liquidation reports time-consuming.

The database of poor beneficiaries did not contain information on the relationship of grantees and household members, which made it difficult for officials to verify the regularity of education benefits.

The audit agency said the DSWD should comply strictly with the guidelines under the National Household Targeting System for Poverty Reduction Manual of Operations to make sure only deserving poor households are included in the CCT program.

Chosen beneficiaries should not be engaged in illegal activities and should be morally upright, the COA said.

The DSWD should also immediately remove from the list unqualified beneficiaries, as well as clarify why some barangays only have one or six household beneficiaries.

And before the DSWD releases succeeding grants, it should ensure that the database of beneficiaries has been verified and validated, to guarantee that the cash assistance would only go to the deserving households, according to the COA.

The DSWD was also urged to coordinate with Landbank to check if beneficiaries with duplicate names had been paid more than once, and delete duplicate or triplicate names.

The DSWD should also revisit the guidelines on education grants to ensure that only those qualified will receive the benefits.

Unqualified grantees should be made to return the amounts, or the officials who approved the release of the funds should be held liable.

Officials who approved the succeeding payments of cash grants despite the absence of requirements under the compliance verification system should be made to explain as well.

The COA also said the DSWD should decentralize the disbursement of the cash grants and their liquidation. This would be more convenient and appropriate since the records of the project are in the regional offices.

The DSWD should also demand from Landbank the return of the funds that were not withdrawn so that no idle funds would accumulate, and require the timely liquidation of the funds.