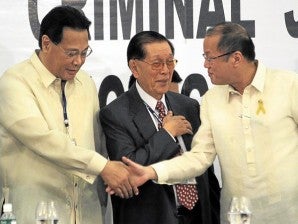 Only a few meters separated them but the gap seemed so wide as President Benigno Aquino III yet again attacked the Supreme Court led by Chief Justice Renato Corona in a nationally televised public forum.

“Just let it be. It’s almost Christmas. Let’s think of peace,” Corona told reporters after listening to the President’s speech at the First National Criminal Justice Summit hosted by the Department of Justice at the Manila Hotel.

But later, the Supreme Court issued a statement saying that “while it is the prerogative of the President to speak his mind, we find it quite disturbing” especially done at an event that was supposed to foster “cooperation and coordination.”

“It is not at all unusual for the executive branch to disagree with the judicial branch. But what is considerably unusual is for the Chief Executive to look down on members of the judiciary in public … and to their faces denounce the court’s independent actions,” Supreme Court spokesperson Midas Marquez read from a statement.

Mr. Aquino lectured Corona in his speech, telling him that the Supreme Court is accountable to the people and saying its power emanated from them.

“We have no plan to step on its rights or humiliate the credibility of anyone. But we have to go back to the main principle of our democracy. Those of us who took an oath to serve only owe it to one: you who are our boss, the Filipino people,” the President said.

“Now there is one public servant who owes a debt of gratitude not to the people who should be the source of our power, but to a patron who squeezed him into the position, will we rely on him to look at the interest of the people?” he added.

Mr. Aquino said the court had seen nothing wrong with the so-called “midnight appointment” by outgoing President Gloria Macapagal-Arroyo of Corona as Chief Justice when the Constitution stated that a President could not appoint anyone within two months before the next presidential election. He pointed out that Corona was appointed a week after the May 2010 balloting.

“The question now is did the Supreme Court violate the Constitution?” the President said.

“To all of those who are our partners in the road to the right path, have faith: As long as we are in the right, we will not retreat in any fight. As long as the people are behind us, we will succeed. Let us not fail the people,” the President said.

On Thursday, the President gave Corona a dressing down at the 30th anniversary celebration of the Makati Business Club.

As Corona sat in stony silence in Monday’s summit, Mr. Aquino did not mince words when he spoke about several instances when the court stopped him from going after Arroyo. He has vowed to put her in jail before Christmas for alleged corruption and electoral sabotage.

Arroyo, now a Pampanga representative, is under hospital arrest after a joint Commission on Elections-Department of Justice (Comelec-DOJ) panel criminally charged her with ordering a 12-0 victory for administration senatorial candidates in 2007 in Maguindanao province on the basis of a testimony by the provincial administrator who is accused of covering up the 2009 massacre of 57 people.

The 64-year-old former President, who is suffering from a rare bone ailment, has denied any wrongdoing.

Mr. Aquino said that the Constitution provided that “power emanates from the people and that all power in government come from them.”

He said he made this reminder because this provision was forgotten during the Ferdinand Marcos dictatorship when his father—the assassinated Benigno “Ninoy” Aquino—was jailed and denied justice.

The President said he had taken an oath to “take care and protect” the Constitution and this included a mandate to ensure that there would be “no repeat of the darkness in the time of martial law and to go after those who had done this.”

Mr. Aquino said he had formed the Philippine Truth Commission to investigate the allegations of corruption in the Arroyo administration but the  court junked the body as unconstitutional. The court then said that the commission was zeroing in on the former President and that this violated the equal protection clause.

“This is just the first step but already a barricade had been put up,”  the President said.

He said the Comelec-DOJ move against Arroyo had also been questioned in the high court. Similarly, the Arroyo camp  questioned the legality of the arrest warrant issued by the Pasay City Regional Trial Court against Arroyo for election sabotage.

Mr. Aquino said that when the high court issued a temporary restraining order (TRO) on the DOJ ban on Arroyo’s travelling abroad for medical treatment, it had several conditions.

“But eventually, the high court itself admitted that there was no need to fulfill the conditions. You put out conditions that you don’t intend to follow,” he said.

He said the Palace had followed the process and despite this he pointed out that it was the Palace that was  said “to be the one looking for a fight.”

“Who will not doubt then their real intention?” the President added, noting that this was not the first time  the court came out with decisions that were “hard to understand.”

“I will stand firm that justice is not a steering wheel that can just be turned where the justices want to go. This is not a toy of lawyers and justices that can be reversed and played to what they want,” he said.

After his speech, the President shook hands with officials sitting with him in the presidential table, including Corona. He shook hands with the Chief Justice when he arrived at the event and when he departed.

Mr. Aquino’s speech  was interrupted only once with applause when he reiterated that the power of the Supreme Court, the President and Congress “come from their sole boss: the people.”

Throughout the program, the President sat a seat away from Corona with Senate President Juan Ponce Enrile  between them.

Marquez told reporters Corona chose to remain “speechless, motionless and expressionless because of the requirements of protocol.”

While the Aquino administration remained “popular,” he said  “no one (branch of the government) has an overruling influence over the other.”

“The accumulation of all the powers in the same hands, whether one, a few or many, and whether appointed or elected, may justly be the very definition of tyranny,” Marquez said.

He disclosed that some “members of the judiciary” wanted Corona and the entire delegates from the judiciary to stage a walkout in protest of the President’s stinging speech.

“Of course that can be done. It’s not very difficult to do that, but then we don’t want the people to suffer,” he said. “This is a summit for all of us, for the Filipino people. We will continue to work with different stakeholders in the justice sector so we can have a more efficient justice system in the country.”