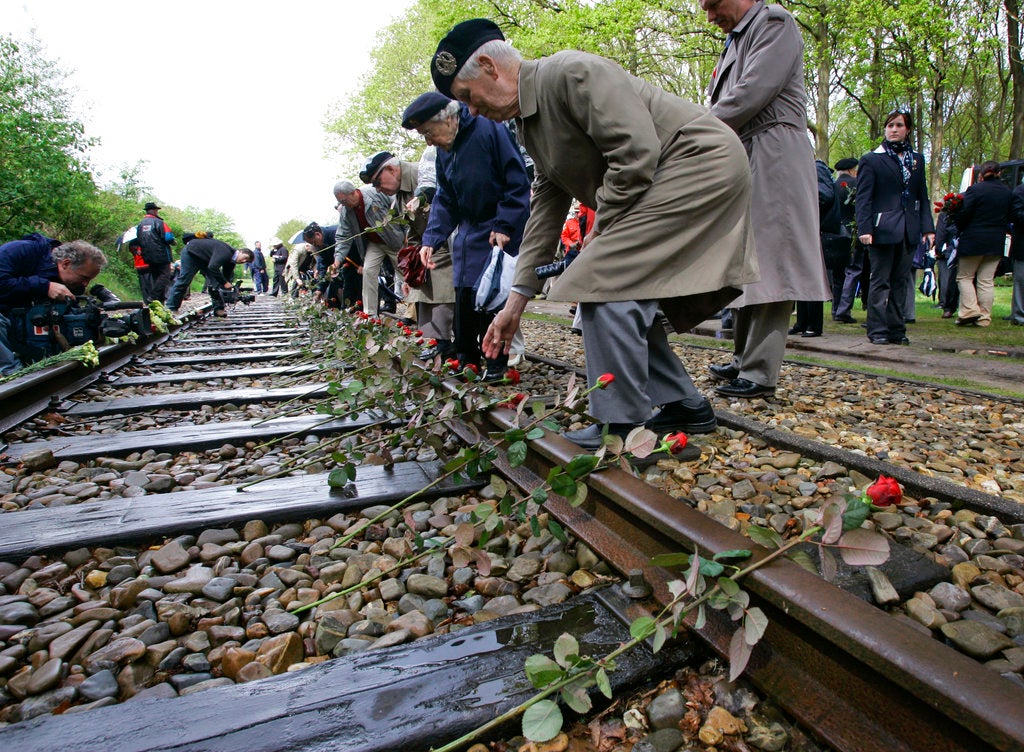 In this Monday May 9, 2015, file photo, Canadian World War II veterans put roses on the railroad tracks at former concentration camp Westerbork, the Netherlands, remembering more than a hundred thousand Jews who were transported from Westerbork to Nazi death camps. The Dutch national railway company NS says it will set up a commission to investigate how it can pay individual reparations for its role in mass deportations of Jews by Nazi occupiers during World War II. (AP Photo/Peter Dejong)

THE HAGUE, Netherlands — The Dutch national railway company is setting up a commission to investigate how it can pay individual reparations for its role in mass deportations of Jews by Nazi occupiers during World War II.

The rail company, NS, said in a statement published late Tuesday that its involvement in the deportations “is a black page in the history of our country and our company.”

The company did not immediately return a phone call Wednesday seeking more details on its plan.

More than 100,000 Jews — 70 percent of the Dutch Jewish community — did not survive the war. Most were deported from the Netherlands and killed in Nazi concentration camps.

Most of the Dutch victims were rounded up in cities and taken by train to camps in the Netherlands before being sent to the border and put on German trains to concentration camps.

NS apologized for its role in the deportations in 2005.

But that was not enough for Salo Muller, a former physiotherapist with Amsterdam soccer club Ajax whose parents were sent by train to the Westerbork camp in the eastern Netherlands before being transported to Auschwitz, where they were murdered in the camp’s gas chambers.

“What this means for me is that the NS sees that the suffering is not over; that very many Jews are still suffering,” Muller said on Nieuwsuur. “That is why I am so happy that they now see, on moral grounds … that reparations will be paid.”

The Dutch railway company is not the first in Europe to confront its dark wartime history.

French railway company SNCF also has expressed regret for its role in transporting Jews during World War II. The railway acknowledges that SNCF’s equipment and staff were used to transport 76,000 Jews to Germany. SNCF has argued that it had no effective control over operations when France was under Nazi occupation from 1940 to 1944.

France’s government has paid more than $6 billion in reparations to French citizens and certain deportees.

The German government has paid around 70 billion euros in compensation for Nazi crimes, mainly to Jewish survivors. /kga

Read Next
WATCH: Grace Poe leads senators in praying for UP win vs AdU
EDITORS' PICK
Get exciting deals and discounts when you download the new McDonald’s App
‘A greener, cleaner tomorrow’: A how-to guide for Filipinos who want to help with today’s energy crisis
SM continues to send relief assistance to remote towns in Batangas
Palace: US Senate move also made Duterte junk VFA
China expands lockdown against virus, fast-tracks hospital
Countries with confirmed cases of coronavirus
MOST READ
FlipTop rapper Loonie freed on bail
No time for revelry; Tagaytay instead plans for alert level 5
Taal’s sulfur dioxide emission increases
Palace: US Senate move also made Duterte junk VFA
Don't miss out on the latest news and information.