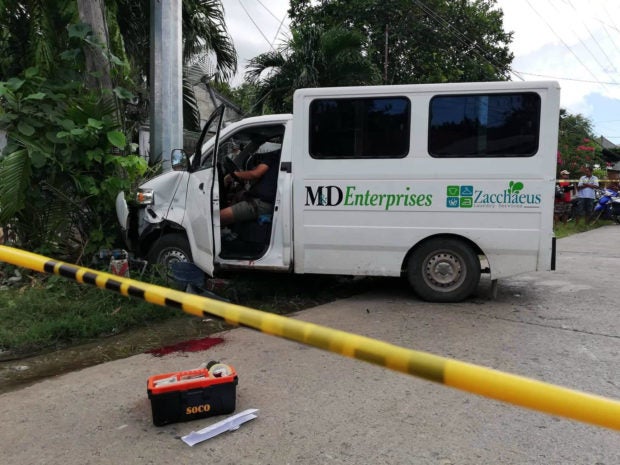 Businessman Mhark Garcia Saavedra was shot dead while with his family while driving in Tagbilaran City, Bohol, on Wednesday morning. Leo Udtohan/Inquirer Visayas

TAGBILARAN CITY, Bohol – A businessman linked to a series of robberies was shot dead while driving with his family in Barangay Bool in this city on  Wednesday morning.

Saavedra, 37, was with his wife Denisse Elyssa, 27, and their three-year-old son, driving their vehicle (Plate number NAY 8189) from Baclayon  going to Tagbilaran City to visit their store.

An initial report said that at 9:45 a.m. on Wednesday while in Purok 6 in Bool, gunmen riding in tandem drove near the vehicle and fired at them. Saavedra’s vehicle hit a lamppost.

Saavedra suffered bullet wounds in the head that caused his immediate death. Denisse, who was injured, was immediately brought to Gov. Celestino Gallares Memorial Hospital.  She was in critical condition, said a hospital source.

The boy was not hurt, said Torrente.

Torrente said Saavedra, who owned a laundry shop and a chemical store known as M&D Enterprises, was linked to a series of robberies in Luzon.

Liza Lucion, 34, helper of the Saavedra couple, said she had not known any threats to the couple.