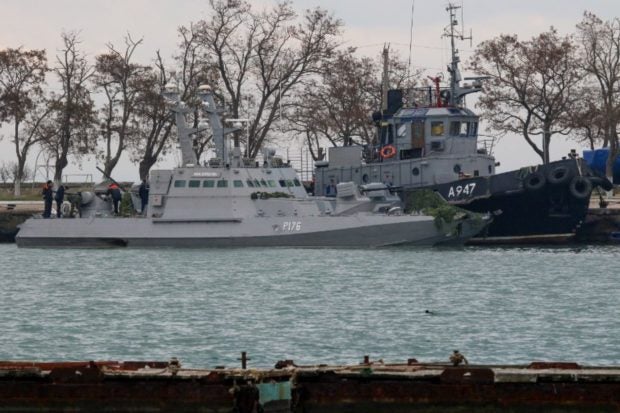 Seized Ukrainian military vessels are seen in a port of Kerch, Crimea, on November 26, 2018. AFP

UNITED NATIONS, United States – The United States on Monday warned Russia that “outlaw actions” like the seizure of Ukrainian ships in the Sea of Azov are preventing normal relations from developing between Washington and Moscow.

US Ambassador Nikki Haley told an emergency meeting of the UN Security Council that “the United States would welcome a normal relationship with Russia. But outlaw actions like this one continue to make that impossible.”

Tensions have flared after the Russian navy on Sunday boarded and seized three Ukrainian ships off the coast of Crimea, accusing Ukraine of illegally entering Russian waters in the Sea of Azov.

The confrontation at sea raised fears of a wider military flare-up.

Haley put the blame firmly on Russia for the clash, calling the seizure of the ships an “outrageous violation of sovereign Ukrainian territory” and slamming “yet another reckless Russian escalation.”

But she did not specifically threaten further sanctions, instead calling for a de-escalation of tensions over Crimea, which Russia annexed in 2014 in a move never recognized by the international community.

President Donald Trump told reporters in Washington that he disapproved, but suggested that European governments would handle the crisis.

“We do not like what’s happening,” said Trump, adding that “hopefully it will get straightened out. I know Europe is not — they are not thrilled. They’re working on it too. We’re all working on it together.”

US Secretary of State Mike Pompeo condemned “this aggressive Russian action” in a statement calling for Russia to return the Ukrainian vessels and release the detained seamen.

Reports that the Russian vessels rammed and fired on the Ukrainian ships, injuring Ukrainian crewmen, before seizing three vessels, represent “a dangerous escalation and a violation of international law,” said Pompeo.

Haley said her remarks at the Security Council followed conversations with Trump and Pompeo, reflecting “concerns at the highest level of the American government.”

The US warning comes ahead of a planned meeting between Trump and his Russian counterpart Vladimir Putin, on the sidelines of the G20 summit in Argentina later this week.

Russia’s envoy accused Ukraine of provoking the confrontation to justify the imposition of martial law and a delay of elections as polls show Ukrainian President Petro Poroshenko faces possible defeat.

Ukraine’s parliament voted Monday on a request from Poroshenko to impose martial law in border regions for 30 days.

Denouncing a “mythical Russian aggression,” Russian Deputy Ambassador Dmitry Polyanskiy told the council: “Our country has never caused the first blow, but it knows how to protect itself.”

Ukraine called for a toughening of sanctions against Russia, with Ambassador Volodymyr Yelchenko warning that “if unopposed, the Kremlin regime will take another and another aggressive act” leading to wider conflict.

The Ukrainian ambassador cited audio recordings of communications among Russian vessel commanders that showed they were given orders to attack the ships after they had changed course and were returning to their Ukrainian port.

France and Germany, which lead European diplomatic efforts to end the conflict in Ukraine, urged Russia to hand over the seized ships and release the seamen.

At the outset of the meeting, Russia suffered a setback in the council after it sought to discuss the clash in the Azov under an agenda item that described the incident as a violation of Russia’s borders.

This was rejected in a procedural vote, with only China, Bolivia and Kazakhstan siding with Russia. The council then discussed the clash under a less contentious agenda item. /cbb