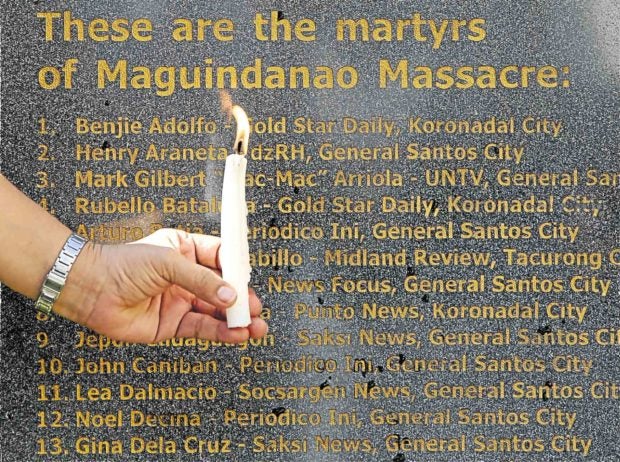 The names of 32 journalists, among the 58 victims ambushed and killed by armed men associated with the Ampatuan clan, are inscribed on a wall of the National Press Club in Manila. MARIANNE BERMUDEZ

COTABATO CITY—Maguindanao Gov. Esmael “Toto” Mangudadatu on Thursday told Malacañang officials he was offered P100 million to drop the charges against those behind the massacre that killed his wife Genalyn, several relatives, and at least 30  media workers nine years ago.

Mangudadatu made the revelation for the first time during a news conference at the site of the killings, where Palace officials joined relatives of the 58 victims in offering prayers for the deceased.

The governor did not go into specifics, only naming a certain Ariel Galindez as the emissary who made the offer.

Mangudadatu said he rejected the offer.

The massacre victims, including journalists, were waylaid on Nov. 23, 2009, allegedly by men linked to the ruling Ampatuan clan.

Mangudadatu, then vice mayor of Buluan town, had sent his wife, two sisters, an aunt, lawyers and aides to file his certificate of candidacy for governor in a bid to challenge Andal Ampatuan Jr. Armed men shot and killed the group along with members of the media who had joined the convoy to cover the unprecedented move against a member of the ruling clan. 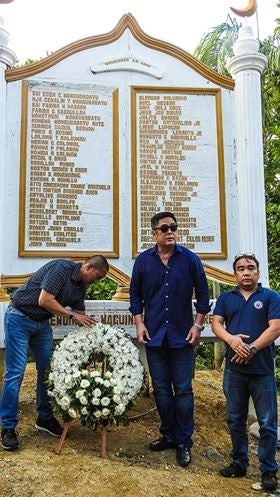 DEADLIEST DAY REMEMBERED Maguindanao Gov. Esmael Mangudadatu, Communications Secretary Martin Andanar and Undersecretary Joel Egco of the Presidential Task Force on Media Security (left) visit the site of the Maguindanao massacre on Thursday, the 9th anniversary of what may be the deadliest day for journalists. FERDINAND CABRERA

Andal “Datu Unsay” Ampatuan Jr. was later held as a primary suspect in the massacre. Four of his siblings were also charged.

The Ampatuan patriarch, Andal Sr., who was the Maguindanao governor at the time of the massacre, died of liver cancer while in detention in 2015.

At Thursday’s commemoration, Communications Secretary Martin Andanar and Undersecretary Joel Egco of the Presidential Task Force on Media Security assured Mangudadatu and relatives of the massacre victims that a verdict would likely come within the first three months of 2019.

“Hopefully it will be favorable to all of us,” said lawyer Nena Santos, legal counsel for the victims’ relatives.

“We remain optimistic of conviction,” said Mangudadatu, who is running for congressman in the 2019 elections after completing three terms as governor of Maguindanao.

“The relatives are glad (about) the statement of Andanar and Egco,” said Emily Lopez, president of Justice Now Movement, an association of relatives of the journalists who were killed in the massacre.

Justice Secretary Menardo Guevarra also commiserated with the families of the victims of the massacre, and said that the government was doing its best to speed up the judicial process to secure the conviction of the accused.

“I share the grief that the families of the (victims of the) Maguindanao massacre continue to endure, and we at the (justice department) pray that the court’s judgment, which we hope will come next year, will be a balm to soothe their pain and suffering,” Guevarra told reporters.

Asked if the prosecution was satisfied with the pace of the trial, he replied, “We could have done it faster but there were certain factors beyond our control—so many accused, so many witnesses, too. Anyway, we are winding up now, and expect a decision hopefully within the first half of 2019.”

Guevarra said he was confident of a conviction, adding that “at least for the principal accused, the evidence appears to be very strong.”

Nine years after the massacre, the practice of journalism remains dangerous in the Philippines, according to opposition Sen. Francis Pangilinan.

“The cases of killings, death threats, the surveillance of media agencies and journalists, libel charges, online harassment, website attacks, revoked registration or denied franchise renewal, and verbal abuse have made the practice of journalism even more perilous,” the senator said on Friday.

The Liberal Party president said the same conditions faced by the Philippine press in 2009 still existed under the Duterte administration.

“We have an administration that does not acknowledge deaths due to extrajudicial killings but instead thrives on fake news and misinformation to get back at its critics,”  Pangilinan said.

“We see altered and controlled public disclosure to suit the purpose of the ruling power … Under this situation, freedom of the press and the people’s right to know are restricted,” he added.

“Today, against this backdrop, we remember those who were killed in the Ampatuan massacre to call for justice and vigilance against repression and manipulation of the press,” Pangilinan said.   —WITH REPORTS FROM DJ YAP AND JEROME ANING