Bishop on Duterte allegation: Let’s bear with people who are sick 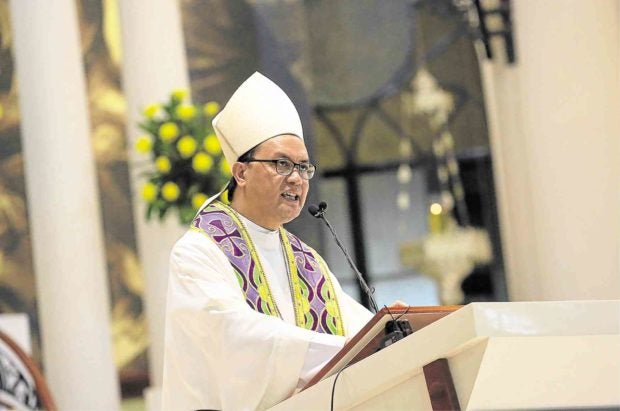 Caloocan Bishop Pablo Virgilio David shrugged off President Rodrigo Duterte’s allegation that he was stealing Church donations, saying such a statement could only come from a “sick” man who did not know what he was talking about.

David on Friday said Mr. Duterte may have confused him with someone else when he alleged that a certain Bishop David was taking Church donations for personal use, something that the bishop stressed he would not do especially since his parents never taught him to steal.

“You see, people who are sick sometimes do not know what they are talking about, so we should just bear with them,” David posted on his Facebook page on Friday.

Earlier, David asked the public to pray for the President even as he said that “our country is being led by a very sick man.”

In a speech during the inauguration of the Cavite Gateway Terminal on Thursday, Mr. Duterte said he had a video clip as proof that “Bishop David” was taking Church donations to benefit his family.

“You, David, keep quiet. You continue asking for contributions from … Where is the people’s money? You keep on asking, you even have a second collection,” Duterte said in Filipino.

“You know what, I’ll tell you, those offerings—pineapples, avocados, bananas, where do they end up? Do you want to know? Do you want a video? I’ll give that to you. They are with his family,” he told his audience.

While Mr. Duterte did not give the full name of the prelate he was accusing, the Caloocan bishop pointed out that he was the only Bishop David in the current roster of the Catholic Bishops’ Conference of the Philippines (CBCP).

In the CBCP’s directory of its bishops, there is actually another bishop named David—Auxiliary Bishop David William Antonio of Occidental Mindoro. However, bishops are traditionally referred to by their surnames.

The Caloocan prelate has been a staunch critic of the President’s brutal war on drugs that has killed thousands of suspected drug users and small-time peddlers, most of them poor.

He was particularly vocal about the killings that happened in areas covered by his diocese, like the case of 17-year-old student Kian delos Santos and widow Jennifer Taburada, and had since led a support group for families of victims of extrajudicial killings.

Like in previous speeches, Mr. Duterte aired his skepticism toward Catholic tenets, like the concept of heaven and hell, which he considered a form of “discrimination.”

‘Catch up with me’

“Why discrimination? You mean, I have two wives and you won’t let me enter [heaven] because I have two wives. There should be only one? Those who will enter there … How about the priests with children and the bishops?” the President said.

He said clergymen should get married and have many girlfriends like him.

“So stop this practice … You should get married and catch up with me. I’ve had two wives and four girlfriends. That is why I am suffering now,” he added.

Earlier this year, the President drew flak over his scathing remarks about God, the biblical story of creation and the concept of original sin.

In July, he ranted about the “stupid God” worshipped by Christians. Earlier this month, he also mocked the Catholic observance of All Saints’ Day and All Souls’ Day, calling the saints “fools and drunkards.”

Religious groups have expressed fears that the President’s attacks on the Catholic Church may encourage his supporters to commit acts of violence directed at priests. Since December, at least three Catholic priests have been reported killed in separate attacks across the country.

The most recent victim was Richmond Nilo, who was killed by still-unidentified gunmen in June as he was preparing for a church service in Nueva Ecija province.

Mr. Duterte has met with Davao Archbishop Romulo Valles, the president of the CBCP, and promised to stop his attacks against the Church. But so far, he has not kept his word.

Read Next
Mangudadatu bares P100-M offer to drop case vs Ampatuans
EDITORS' PICK
97% of COVID-19 beds at PGH currently occupied
Gear up and get ready to play with Yamaha Mio Gear
Acer starts the year off strong with the Aspire Vero National Geographic Edition
Japan brings back virus restrictions over Omicron surge
Over 3 Million worth of prizes to be won at Smart Padala’s SENDali Manalo Promo!
Uproar over no vax, no ride policy: Maybe it’s time for gov’t to say sorry—Bello
MOST READ
1Sambayan names 7 aspirants in its 2022 Senate lineup
Emma Stone calls Andrew Garfield a ‘jerk’ after he ‘lied’ about his ‘Spider-Man: No Way Home’ appearance
Guevarra to Acosta: Obey rules on unvaccinated
PH to import 60,000 tons of fish to cover shortage
Don't miss out on the latest news and information.