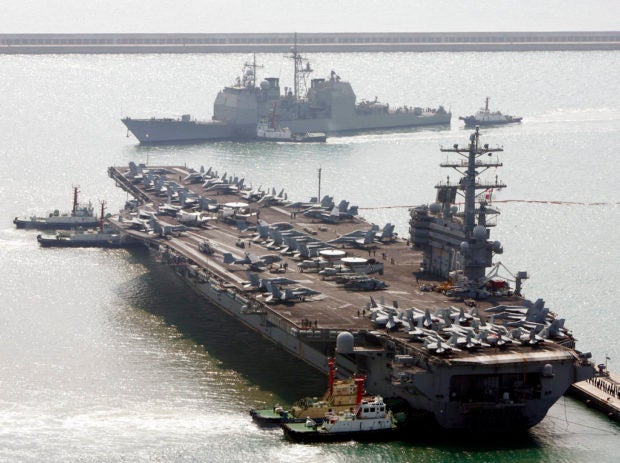 In this March 22, 2007 file photo, the US aircraft carrier USS Ronald Reagan, bottom, anchors as US Aegis Ship passes after they arrive at Busan port for joint military exercises in Busan, South Korea.  AP

HONG KONG — China is allowing a US Navy aircraft carrier and its battle group to make a port call in Hong Kong after it earlier turned down a similar request amid tensions with Washington.

China in September turned down a request for a port call in Hong Kong by the amphibious assault ship USS Wasp, the first time it had denied such a visit since 2016.

The earlier denial came amid a spike in tensions over Taiwan and the South China Sea that resulted in various exchanges being put on hold. China claims virtually the entire strategic waterway and regularly challenges US Navy ships sailing close to its island claims in the area.

While such tensions remain, the Reagan’s expected visit precedes a planned meeting later this month between President Donald Trump and Chinese leader Xi Jinping in Argentina that will mark the first time they’ve sat down together since the start of a bitter trade war. /ee