3,100 stranded in Visayas, Mindanao due to ‘Samuel’ 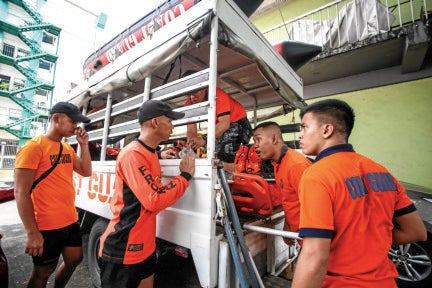 More than 3,100 passengers were stranded in ports in the Visayas and Mindanao Tuesday morning due to Tropical Depression “Samuel,” the Philippine Coast Guard (PCG) said.

The PCG, in a Twitter post, said that as of 4 a.m., a total of 3,153 were stranded in various ports due to inclement weather.

The PCG recorded the highest number of stranded passengers in ports in Central Visayas with 1,472.

It was followed by ports located in Northern Mindanao with 691 stranded passengers and Bicol with 375 passengers.

The PCG also monitored a total of 609 stranded passengers in Southern, Eastern, and Western Visayan ports. Meanwhile in Bohol, six passengers were stranded.

Aside from these, the agency recorded 469 of rolling cargoes, 129 vessels, and 31 motorbancas that were not allowed to travel due to rough sea conditions.

As of 4 a.m., Samuel was packing with maximum sustained winds of 55 kilometers per hour (kph) and gustiness of up to 65 kph.