San Juan checks on safety of parking buildings in Greenhills 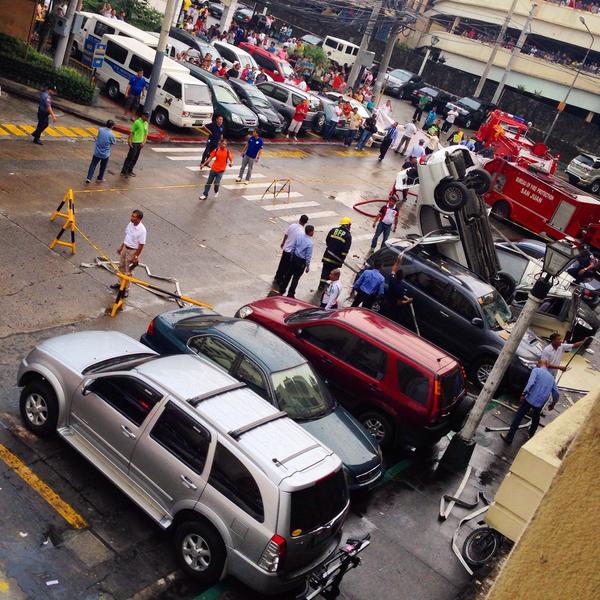 A parking lot accident at the Greenhills Shopping Center also happened in 2014, in which then 73-year-old Juanito Nocus was injured. (Contributed photo by JEFFROY MIRAFLOR)

The safety of these parking buildings, the senator said, is now one of the subjects of investigation by the city government after another car fell from the third floor of a car park at the shopping mall Sunday morning.

The driver of the car is Sen. Grace Poe’s father-in-law, 83-year-old Dr. Teodoro Paraiso Llamanzares, who sustained fractured ribs and bruises but was pronounced in stable condition at the Cardinal Santos Medical Center.

Ejercito noted that this is not the first time that this incident happened in the area.

In 2014, a car also fell from an elevated parking space in the area. The driver of the car, then 73-year-old Juanito Nocus, was also hurt in the incident.

“Kasi yung mga parking buildings ngayon dun are all temporary, lahat yun temporary. But still they have to provide stoppers and make sure that it is safe,” the senator told reporters on Monday.

Ejercito noted, however, that the structures were sturdy and some of them were erected five to 10 years ago.

“These are all temporary infrastructures, but again that doesn’t mean hindi sinusunod yung safety measures,” he said. /atm