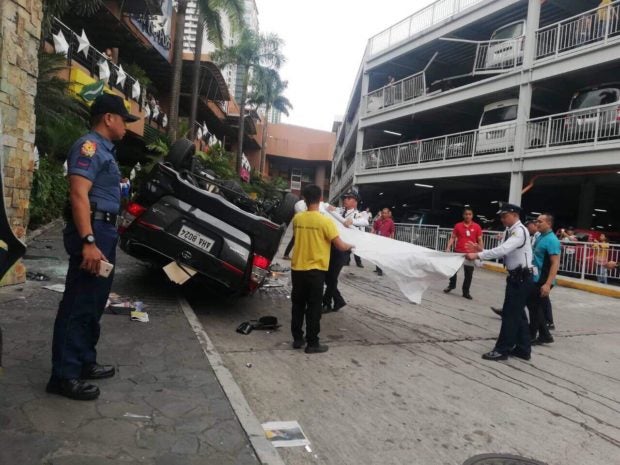 The father-in-law of Sen. Grace Poe was injured after the vehicle he was driving fell from the third floor of a car park at Greenhills in San Juan City on Sunday morning.

Teodoro Paraiso Llamanzares, an 83-year-old doctor, was brought to Cardinal Santos Medical Center for treatment. He reportedly sustained fractured ribs and bruises but was otherwise in stable condition.

Senior Supt. Dindo Reyes, San Juan police chief, said Llamanzares and his wife had just come from Mass when they decided to go to the shopping center.

The victim’s wife alighted from their black Toyota Innova at the mall while her husband drove to the elevated parking area of Greenhills Promenade.

Reyes said that as Llamanzares drove from the second to the third floor of the building, the vehicle began to slow down.

When he accelerated, however, the Innova went through the metal railing and plummeted to the ground around 9:45 a.m.

Reyes said the shopping center’s medical team quickly provided treatment to the doctor. No other persons were reported injured.

“Thankfully my father-in-law, Dr. Teodoro Paraiso Llamanzares, is alright and no one else was hurt in the incident,” she said in a statement.

She noted that her father-in-law was wearing his seatbelt when the incident happened and only suffered minor injuries.

“It’s a good thing he was wearing his seatbelt so he only has a few fractured ribs and bruises but we expect a speedy recovery,” the senator said.

Poe also expressed her gratitude to those who offered their prayers.

“We want to thank everyone for their prayers and concern. We’re just thankful he was kept safe and no one else was injured,” she said. /je /atm