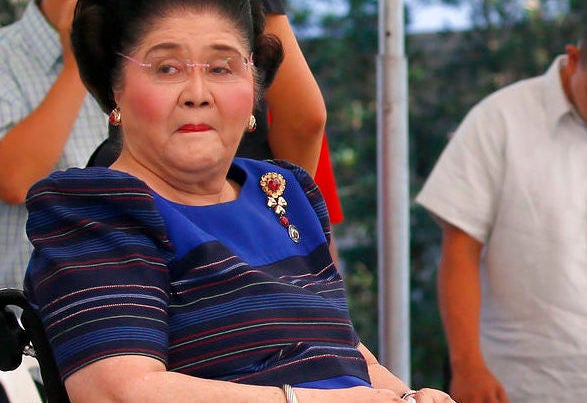 Opposition Senator Leila De Lima denounced on Monday the Sandiganbayan’s order allowing former First Lady Imelda Marcos to post a P150,000 bail, blasting the move as one of the “grossest inequality in our justice system.”

De Lima said that Marcos’ bail of P150,000 was “nothing compared” to the amount of money that Imelda and her husband, Ferdinand, have supposedly stolen from people’s taxes and diverted to secret Swiss bank accounts.

“Imelda Marcos’ conviction and bail grant in a matter of a few days just shows one of the grossest inequality in our justice system,” De Lima said in a dispatch from Camp Crame where she is currently detained.

“The amount of her bail is nothing compared to the amount of the people’s taxes she and her husband were found to have stolen and diverted to their secret Swiss bank accounts,” she added.

De Lima said that majority of Filipinos who were affected by the Marcos’ “looting of government coffers” were suffering in jail not because they were guilty but they could not afford to post bail.

“Thousands of accused remain in jail waiting for the trial of their cases, not because they are guilty but because they cannot afford to post bail or are accused of non-bailable offenses,” De Lima said.

De Lima added that there are old and sick people languishing in jail and deprived of the privilege of provisional liberty based on “humanitarian considerations,” which De Lima said Mrs. Marcos invoked as an excuse for her not to be imprisoned.

“Same excuse of multiple illness is invoked by Imelda Marcos for her provisional liberty, something the poor and powerless similarly-situated convicted persons could never achieve,” De Lima wrote.

De Lima said that this “unconscionable and abhorrent state of affairs” in the Philippine justice system was “unacceptable.”

The Sandiganbayan has allowed Marcos to post P150,000 bail and enjoy temporary liberty while the court decides on her motion for leave despite the anti-graft court’s decision convicting her on seven cases of graft.

Mrs. Marcos has been found guilty of seven counts of graft by the Sandiganbayan’s Fifth Division last Nov. 9.