Charges readied vs those responsible for bringing in 5,100 tons of waste through Misamis Oriental
Philippine Daily Inquirer / 05:12 AM November 16, 2018 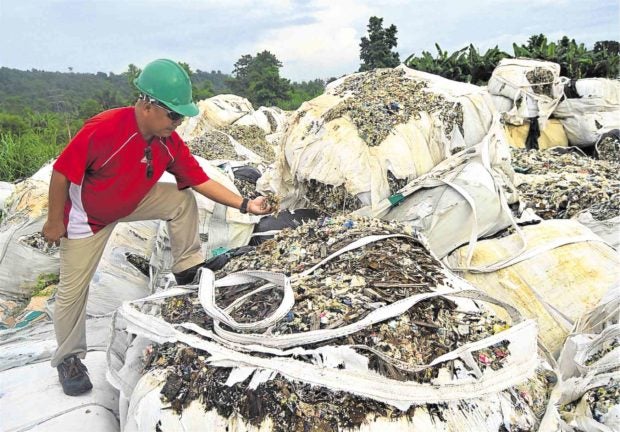 Officials of the Department of Environment and Natural Resources (DENR) on Wednesday said they would file charges against those responsible for bringing into the country 5,100 tons of trash from South Korea.

Environment Undersecretary Benny Antiporda also said the government was working to return the garbage while the DENR looked into the shipment’s entry to the country through Misamis Oriental province.

“What [Environment] Secretary [Roy] Cimatu wants right now is to have that shipment of trash returned to its origin. He wishes to stress that the Philippines is not a garbage dump,” Antiporda said.

He said the government was preparing charges against the importer and consignee, including their partners in South Korea, for bringing the shipment here despite the lack of an import license.

“Importing anything, without an import permit, is already a violation of the law by itself. Worse, we see a lot of violations here on environmental laws,” he said.

In July, more than 5 metric tons of plastic materials arrived from South Korea at the Mindanao Container Terminal subport at Tagoloan town in Misamis Oriental.

“We will have this returned, but it shall be done at the expense of the importer,” Antiporda said.

An audit of the trash shipment showed that it was imported from South Korea by Verde Soko Phil. Industrial Corp., which has an application as an importer of recyclable materials.

The Bureau of Customs (BOC) in Northern Mindanao held the shipment due to alleged violations by Verde Soko.

Floro Calixihan, BOC regional collector, said the materials were misdeclared as “plastic synthetic flakes” but they discovered that the shipment included all sorts of plastic materials.

Documents showed the shipment was declared as containing 5,100 tons of “scrap polyethylene and polypropylene plastics from Junggu district in Seoul.”

But a report from the environmental quality division of the DENR’s Environment Management Bureau (EMB) said the shipment, aside from the declared plastics, contained 31.7 tons of trash classified as “special or hazardous waste.”

In Misamis Oriental, Neil Alburo, president of Verde Soko, the company engaged in the recycling of plastics based in the Phividec Industrial Authority (PIA)-managed economic zone in Tagoloan, said the shipment was not mere garbage but raw materials  that would be processed in the company’s plant.

Alburo said his company had complied with all requirements set by the PIA before it was allowed to set up shop at the economic zone at Sitio Buguac, Barangay Santa Cruz in Tagoloan.

He said Verde Soko’s operation would be pollution-free and would not harm the environment or nearby communities.

Dax Jara, PIA safety specialist, said they had given Verde Soko clearance to operate a recycling facility within the Phividec Industrial Estate complex.

“If EMB finds the discarded materials toxic, Verde Soko would be willing to have it shipped back to South Korea,” Alburo said.