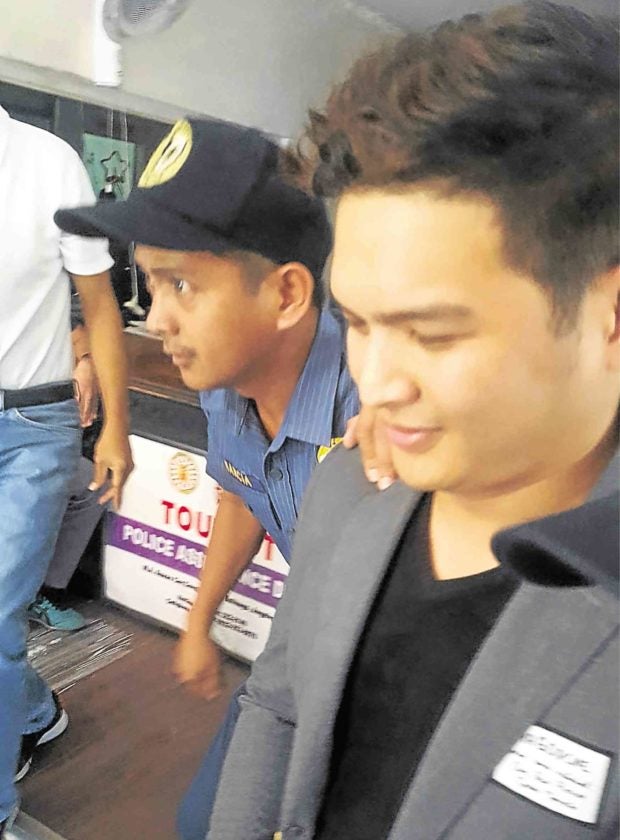 ANGELES CITY — Jojo Serafico Valerio, the man driving a sport utility vehicle (SUV) bearing a license plate reserved for lawmakers and who was caught by security camera punching a nurse in a road rage incident, has been arrested and charged with serious physical injury and violating the traffic code.

Valerio, 30, was presented at Angeles City prosecutor’s office, hours after he was arrested on Tuesday night at a bar in Tarlac City.

Valerio, his mother and his girlfriend did not respond to reporters’ questions when he was returned to the Angeles City Police Station 4 here.

A resident of Quezon City, Valerio has yet to submit documents that will show he owns the Toyota FJ Cruiser, which carries a set of car plates bearing “8,” which is reserved only for lawmakers.

Police arrested Valerio for allegedly assaulting Jesusito Palma, 26, a nurse, between 1:30 a.m. and 2 a.m. on Nov. 11 at Barangay Balibago here.

Palma said he might have angered Valerio because he drove past him in Balibago. Palma said Valerio punched him several times, hitting his face.

Various reports described Valerio as a son of a retired police official and lawyer in Quezon City and a nephew of a congressman in Metro Manila. The suspect did not give any details about his background.

On Tuesday, posts on social media claimed that the SUV driven by Valerio was owned by Pampanga Rep. Carmelo Lazatin II.

But Lazatin said he had not received his congressional license plates after winning his first term as representative of the province’s first district in 2016.

Assistant Secretary Edgar Galvante of the Land Transportation Office confirmed that the agency had not yet issued new protocol plates No. 8 since it was still addressing a backlog in the production of license plates.

“But we still honor the [current] protocol plates for congressmen. In fact, we have suggested to the secretary general [of the House of Representatives] if it is okay to emboss the name of their districts,” Galvante told the Inquirer by telephone.

Users of unauthorized protocol plates should “answer for the infraction,” he added.

In August 2016, former Speaker Pantaleon Alvarez ordered the recall of protocol plates issued to lawmakers during the 16th Congress.

Cesar Pareja, House secretary general,  said Alvarez was disturbed by reports that vehicles with No. 8 license plates “have been spotted in indecent places or figured in crime-related activities.”

Navotas Rep. Tobias Tiangco proposed a ban on the use protocol plates because “these have always been associated with privilege and abusive behavior exhibited by individuals driving or using these vehicles, whether government officials or persons posing as such.”

Executive Order No. 400, signed in 2005 by then President Gloria Macapagal-Arroyo, authorized only two pairs of plates to select officials, except for the President (license plate No. 1), Vice President (2), Senate President (3), Speaker (4) and Chief Justice (5).

Senators (7) and representatives would be entitled to not more than four pairs of plates.