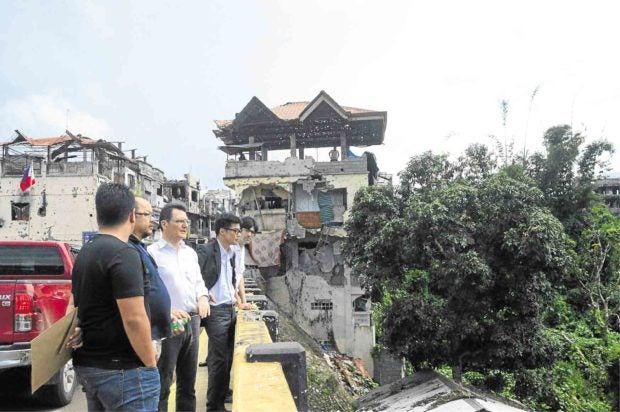 MARAWI CITY — The Asian Development Bank (ADB) is allocating $400 million in grants and loans for the rebuilding of Marawi City.

Stephen Groff, ADB vice president, who recently visited the city to see the extent of damage from the five-month battle between government forces and Islamic State-linked gunmen last year, said there were still many areas in the city that needed help.

He said houses, roads, bridges, schools, hospitals and sanitation facilities must be rebuilt.

Groff said ADB was preparing a recovery and rehabilitation program to help Marawi get back on its feet.

“It is important that we can get a very good picture of what the real situation of Marawi City is to make sure that the package we bring forward to our board of directors could actually provide the necessary support to help in the recovery and rehabilitation of the city,” he said.

Groff met with officials of the Lanao del Sur provincial government and Marawi and talked with displaced families at the temporary relocation site in Barangay Sagonsongan here to determine the amount of help needed for the recovery of the city.

But he said housing projects would not be the focus of ADB’s rehabilitation efforts.

He said ADB would help in the reconstruction of damaged schools as part of the assistance but it could not give school and scouting uniforms to displaced students.

Groff said he was encouraged by the dedication of local and national government officials to make the recovery and rehabilitation real.

In Baguio City last week, Samira Ali-Gutoc Tomawis, a former assembly member of the Autonomous Region in Muslim Mindanao, urged government forensic scientists to speed up the process of identifying people who died in the Marawi siege.

When Marawi commemorated All Saints’ Day on Nov. 1, some of its Christian families visited their relatives, who died in the siege, at the Muslim cemetery where they believed they were buried, Tomawis told a student forum at the University of the Philippines Baguio.

Families had been unable to account for relatives who disappeared during the five-month siege, more than a year after soldiers regained control of the city taken by the Maute Group, she said.

Some families believed their missing kin may have been included among the more than 1,000 fatalities who the government had initially classified as “terrorist fighters,” she said.

Tomawis said the families believed only 200 of the dead were Maute Group and Abu Sayyaf members.

“We now need facts and data,” Tomawis said. Only a comprehensive forensic investigation by the National Bureau of Investigation and the Philippine National Police could help resolve these issues and allow the families to move on, she said.

A probe would also shed more light as to who were responsible for civilian deaths, some of them children who were killed inside a mosque, she added. —With a report from Vincent Cabreza