Gov’t told: Why punish farmers for your shortcoming? 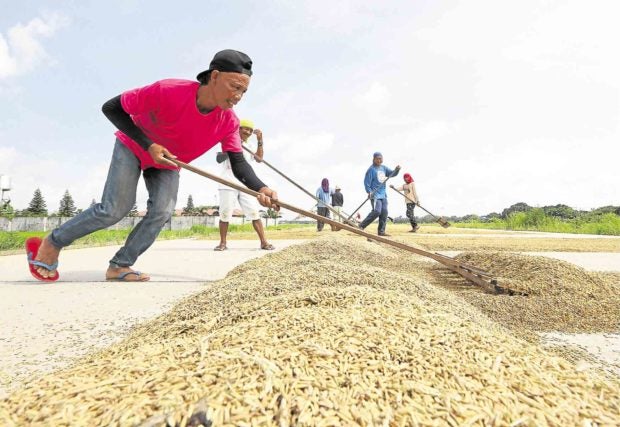 NO FACILITY Farmers in Pangasinan province prepare their harvest for drying on a road, a practice that officials now want to be penalized with fines and prison terms. —NIÑO JESUS ORBETA

CITY OF SAN FERNANDO — The government should provide facilities for drying palay instead of threatening farmers with fines or jail time for using roads to sun-dry their harvest for milling, according to two groups.

Amihan, a group of women farmers, and rice watchdog Bantay Bigas said penalizing farmers because of lack of postharvest facilities was a stupid idea.

Zenaida Soriano, Amihan chair, and Cathy Estavillo, Bantay Bigas spokesperson, issued a joint statement after the Department of Public Works and Highways (DPWH) reiterated a policy against the use of national roads for drying grains.

“We understand that the orders are meant to ensure the safety of motorists,” Estavillo said.

“But penalizing farmers for the government’s failure to provide support services to farmers is unjust and unreasonable,” she said.

“Farmers should not be held responsible without the government providing an alternative option,” she added, stressing that a mechanical dryer costs about P500,000.

Citing a paper prepared by the Philippine Institute for Development Studies, Estavillo said any delay in drying palay could result in broken grains that would reduce their value when sold in the market.

Soriano said the government “should provide much needed services to farmers, including farm inputs and postharvest facilities to lessen the cost of production and to increase the production rate, especially of rice.”

The Department of Agriculture’s (DA) Philippine Center for Postharvest Development and Mechanization (PHilMech) said it would start commercializing later this year what it called a fluidized bed dryer to improve the grain drying process.

Dr. Baldwin Jallorina, PHilMech executive director, said the product had been tested and tried in the past two years and would increase capacity from 500 kilograms of palay per batch to a ton per batch.

Using the dryer, the drying cost was expected to be lower than the industry average of P1 per kilogram, the agency said.

The ideal moisture content for palay is 14 percent, it said. —TONETTE OREJAS