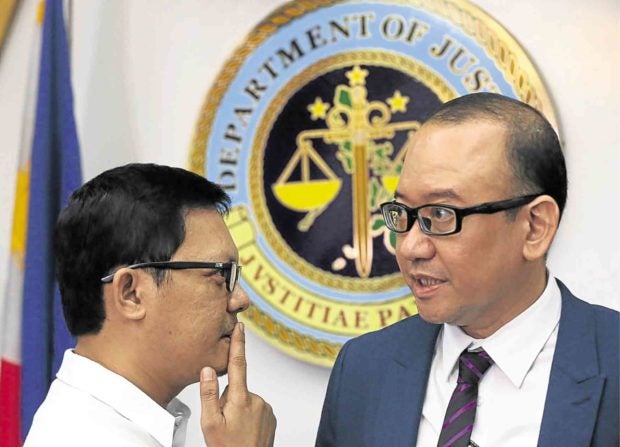 The Sandiganbayan has ruled that the graft and bribery cases of former Bureau of Immigration (BI) officials Al Argosino and Michael Robles should proceed to trial.

In a seven-page resolution dated Nov. 12, the court’s Sixth Division denied the two’s motion to quash and dismiss the charges citing double jeopardy.

Argosino and Robles — fraternity brothers of President Rodrigo Duterte — argued they should not have been charged with direct bribery and violating the Anti-Graft and Corrupt Practices Act and Presidential Decree No. 46, punishing acceptance of gifts by public officials.

They claimed they were put through “legal jeopardy” because they were also charged with and were detained for plunder, a nonbailable offense.

The Sandiganbayan disagreed, saying there was no double jeopardy if the accused “has not yet been acquitted or convicted of plunder.”

The court said only a conviction or acquittal would bar the prosecution of the accused for the same offense.

Argosino and Robles could simultaneously be charged with the four crimes for allegedly extorting P50 million from gaming tycoon Jack Lam in November 2016, the court ruled.

In a separate 32-page resolution dated Nov. 12, the Sixth Division also denied appeals on the Aug. 30 ruling denying petitions for bail in the plunder case.

The three argued that evidence was not sufficient to justify denying them bail.

The court rejected the argument that the security footage showing the alleged receipt of payoff at City of Dreams Manila lacked audio.

It said “using sense of sight,” it could easily determine that Argosino, Robles and Sombero were the persons depicted in the video file.

It said lack of sound was “of no moment,” since it “never made any finding based on what the persons in the video talked about.”

The court also swept aside Robles’ claim that the video did not show they took possession of the bags of money.

It said Sombero appeared to have “relinquished control” over the money by placing them on the floor under a table and an unnamed companion wearing a white shirt carrying away the bags for Argosino and Robles.

The court also dismissed Sombero’s claim that he could not be held as a coconspirator because he was the informant of former BI intelligence chief Charles Calima, who conducted counterintelligence operations on the two deputy commissioners.

It said “the scheme of the accused would not have been successfully executed without accused Sombero’s participation.”