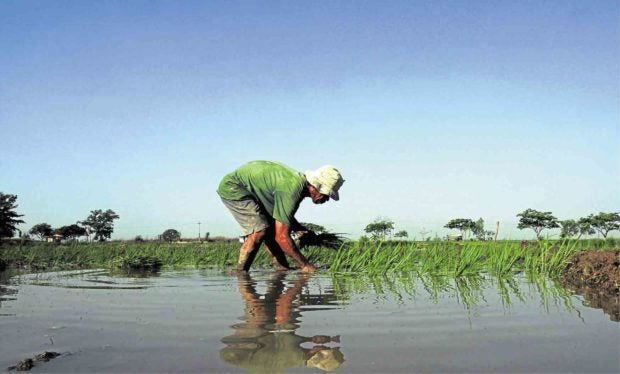 After typhoons ravaged agricultural lands during the third quarter of the year which led for the sector’s output to fall, the Department of Agriculture (DA) is now looking to readjust its planting calendar to make the sector less vulnerable to climate change.

Moreover, it’s planning to develop new rice farming areas in provinces that are not often hit by weather disturbances to secure the country’s food production.

Agriculture Secretary Emmanuel Piñol revealed the agency’s plans on his Facebook page and in an earlier interview with reporters, wherein he said that they will now move the harvest season in Northern Luzon – known as the country’s rice granary – to August from September.

The agency would also develop around 300,000 hectares of land in Samar, Leyte, Negros Oriental, Negros Occidental, Panay Island, Palawan, and Mindoro for planting rice to raise the country’s rice inventory.

“While historically, typhoons would hit Northern Luzon during November to December of every year, there has been a pattern over the last three years when storms would start coming in as early as September,” the secretary said.

“Under the new planting calendar, the NIA (National Irrigation Administration) must open irrigation canals as early as April and May to allow farmers to sow early and harvest before September,” he added.

The decision came after the sector’s performance fell by 0.83 percent in the third quarter, which was heavily pulled down by a decline in the country’s palay and corn production by 5.7 percent and 14.83 percent, respectively.

This put the country’s overall agricultural growth at a mere 0.15 percent from 4.59 percent a year ago, data from the Philippines Statistics Authority showed.

Major rice-producing and fishing areas in the country were distraught by a series of typhoons, the strongest of which was Ompong. The sector incurred about P26.7-billion in damages after its landfall.

Socioeconomic Planning Secretary Ernesto Pernia recently hit the agriculture’s dismal performance for dragging down the country’s economic growth, which slowed down at 6.1 percent during the period.

When asked for comment, Piñol said economic managers have a “simplistic view” on the nature of agriculture, which heavily relies on favorable weather conditions.

“Here in the DA, we understand the seasonality of agriculture and vulnerability to weather disturbances [that’s why] we’re adjusting the planting calendar,” he said. “We can only pray.”

Annually, the Philippines is visited by an average of 20 typhoons. For this year, the country was already hit by 19 typhoons, and the state weather bureau is expecting six more.

The DA had earlier projected a harvest of 19.4 million metric tons (MT) of rice this year, but after several farm lands were destroyed by natural calamities, it cut its projection down by 800,000 MT to 18.6 million MT.

Following these developments, hitting the agency’s annual growth target of 4 percent may now be too far-fetched. Piñol said they are not expecting any additional production of rice and corn by the end of the year. /cbb