The Quezon City police has started investigating the killing of one of its men on Wednesday night.
By: Jhesset O. Enano - Reporter / @JhessetEnanoINQ
Philippine Daily Inquirer / 05:12 AM November 09, 2018 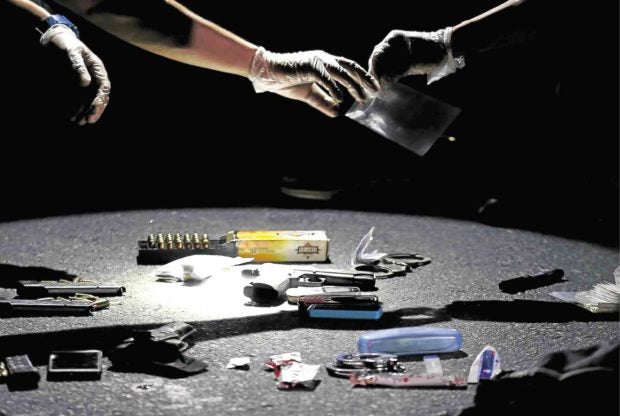 DEAD ON THE SPOT Crime scene investigators examine the evidence found at the spot where PO3 Rufino Gabis of the Quezon City police was killed by men on a motorcycle at the corner of Kalayaan and V. Luna Avenues. —RICHARD A. REYES

The Quezon City police has started investigating the killing of one of its men in an ambush on Wednesday night.

The 47-year-old policeman was driving his white Toyota Fortuner when he was shot at the corner of V. Luna and Kalayaan Avenues at Barangay Malaya, just a short distance away from Camp Karingal, the QCPD headquarters.

Footage taken by a closed-circuit television camera showed that around 8 p.m. on Wednesday, two men on a motorcycle followed Gabis.

When his vehicle stopped at the traffic light, Gabis was shot several times by the backrider.

The gunman who was reportedly wearing a black jacket and a helmet escaped with the motorcycle driver.

Gabis was killed outright due to gunshot wounds in the neck and shoulder.

Recovered from his vehicle were P300,000 in cash, bullets and two Colt firearms with the same serial number: FG 88249.

QCPD records showed that Gabis was previously assigned to the drug enforcement unit of Kamuning police station until he was relieved and reassigned in June over an administrative case for impropriety, Esquivel said.

The headquarters support unit often serves as a “holding unit” for police officers who had been relieved of their posts and charged administratively.

Esquivel said that they would investigate why Gabis was carrying guns with the same serial number plus a huge amount of money. They would also check if his work at the antidrug unit might be related to his death.