Five years after ‘Yolanda,’ Leyte residents remember their loved ones

TACLOBAN CITY — It takes a lot of strength to bury 11 family members in a single burial ground. But Dr. Clara Rose Brit had to endure the unimaginable.

The 21 others buried in the same plot were either their neighbors or people  swept away to their place by the strongest typhoon to hit inland on Nov. 8, 2013.

Every year, it has become a family tradition for the remaining family members to offer a Mass every 8th of November to remember those who perished in the tragedy.

‘Yolanda’ pummeled Leyte and other parts of Eastern Visayas on the morning of November 8, 2013, killing more than 6,000 people. 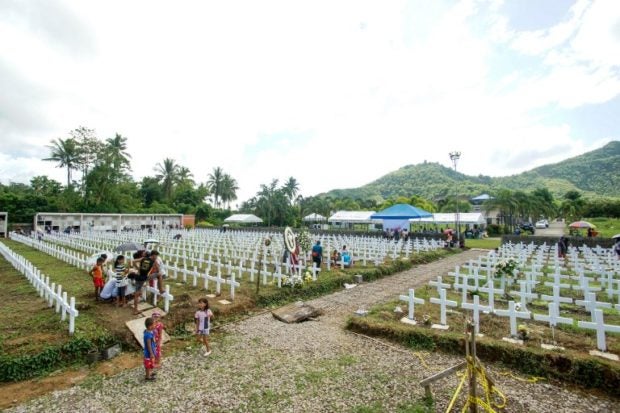 Residents visit the grave of a relative at the mass grave for victims of Super Typhoon ‘Yolanda’ (international name Haiyan) during the fifth anniversary of the typhoon in Tacloban City, Leyte province, central Philippines on November 8, 2018. AFP

Brit said she lost her mother, Remedios Zabal, and about 50 percent of their family on that day. The oldest was her grandmother, Catalina Zabala, 86. The youngest was her nephew, five-year-old Liam Monserate. Two pregnant women also died during the onslaught.

The mass grave was located inside the family’s sprawling compound where 22 people live in five houses.

Brit said they decided to bury their loved ones inside the compound because the situation in the aftermath of Yolanda was chaotic. It was also meant to enable them to visit them often.

“It has been five years now, and though it still pains us so much, we have learned to accept what happened to us. We still sorely miss them,” Brit’s elder brother, Archie Zabala, 50, said.

Lighting a candle at mass graves

Since 2014, Herminigilda Nilo, 64, of Barangay Quinapondan, also in Palo, would light a candle at the mass grave located inside the compound of the Palo Cathedral every Nov. 8 for her former employer, Dolores Caballero.

“I always come here and visit her since 2014. She was good to me and my family,” Nilo said.

Caballero was one of the more than 500 fatalities buried in a mass grave that was visited by Pope Francis during his visit to Leyte on January 17, 2015.

She lit a candle and offered a silent prayer to her former employer of 22 years. She still works with Caballero’s daughter, Salvacion, as a house helper. 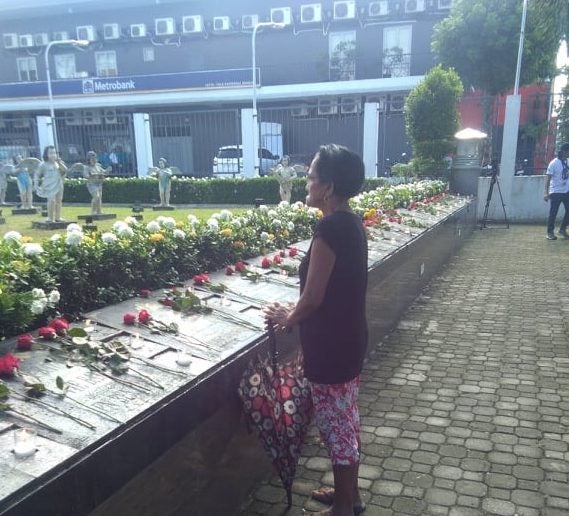 Herminigilda Nilo visits the grave of her former employer, Dolores Caballero, who was among those buried in a mass grave in Palo, Leyte.

READ: Not even rains can stop pilgrims from seeing Pope Francis in Tacloban

Although the province remain in mourning five years after ‘Yolanda,’ government and Church officials asked the survivors to accept their fate and “move on.”

In his Homily at the grave yard to commemorate the anniversary of the onslaught on Thursday, Fr. Sunny Quejada, parish priest of the Our Lady of the Poor, also in Palo, said the survivors should instead be thankful to God for their life.

“We still have a mission in life (that’s) why we survived. Those departed have ended their earthly lives. But we should not forget them as they were part of our lives,” he added.

Palo Mayor Remedios Petilla echoed the call of the priest.

“We should not forget what happened to us five years ago, but we should move on. Those who died due to ‘Yolanda’ would not feel at peace if those they left behind continue to mourn over their loss,” Petilla said.

More than 1,500 from the town were killed during the onslaught.

Classes and work were suspended during the anniversary in many parts of Region 8, which is composed of Leyte, Southern Leyte, Northern Samar, Eastern Samar, Samar and Biliran. /ee