Bono to US Congress: Thanks for ignoring Trump on AIDS funding | Inquirer News

Bono to US Congress: Thanks for ignoring Trump on AIDS funding 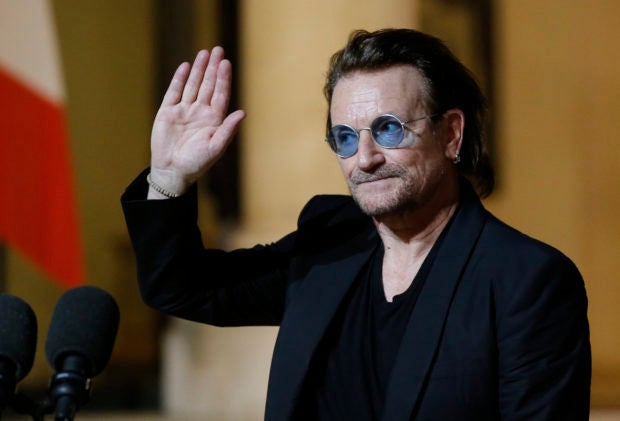 In this Sept. 10, 2018 file photo, U2 singer Bono waves good-bye to the media after a meeting with French President Emmanuel Macron at the Elysee Palace in Paris, France. AP

LONDON — Bono has a message for the US Congress: Thanks for ignoring President Donald Trump.

Trump has sought to slash hundreds of millions of dollars from US funding for AIDS programs at home and abroad, but the U2 frontman says members of Congress “have so far turned down this president’s request to cut AIDS funding — right and left in lockstep together on this.”

His message to them? “Thank you for your leadership.”

Bono is caught between hope and frustration as — for the third time in a decade — he organizes an auction to raise money for the fight against HIV/AIDS. Sotheby’s announced details Monday of the Dec. 5 sale in Miami to benefit (RED), the charity founded by Bono in 2006.

Two previous sales, in 2008 and 2013, raised $68 million. Five years on from the last, Bono says big strides in prevention and treatment of HIV/AIDS are threatened by a slackening of global resolve.

“We could be at the dumbest moment ever, which is we’re almost at the moon and we turn back,” Bono told The Associated Press by phone from Dublin.

Almost 37 million people worldwide have HIV, with nearly 22 million of them receiving antiretroviral therapy, the most effective form of treatment, according to UNAIDS. The number of annual infections has fallen by almost half since 1996, to 1.8 million, and the number of deaths has halved since 2004.

Bono says the results are the product of “incredible leadership from around the world” that has made the elimination of the disease a realistic prospect.

“There’s this gathering consensus and momentum — and now people are looking the other way, and it’s just the wrong moment,” he said.

To help draw attention back to the cause, Bono turned to two influential artists whose work, he says, “has a social-justice core.” The auction is curated by British architect David Adjaye, who designed the National Museum of African American History and Culture in Washington, D.C., and US artist Theaster Gates, who runs artistic and social projects from his base on Chicago’s south side.

Adopting the theme “light,” the pair has assembled more than 50 lots from artists, architects and designers, including Ai Weiwei, Jeff Koons, Yinka Shonibare and Sean Scully. Design pieces include sneakers by Christian Louboutin; a curvy coffee table by the late Zaha Hadid; and a ring carved from a whole diamond, created by Apple Inc. design chief Jony Ive and industrial designer Mark Newson.

Adjaye is offering items he’s designed including a concrete speaker — in red, naturally — and Gates has contributed one of a series of tapestries made from strips of used fire hose.

“We wanted to re-shed light on this subject matter, metaphorically,” said Adjaye, who also worries that the world’s attention has strayed from AIDS, and other crises.

“I think our collective sense of civil society is very much under siege,” he said. “That creates a kind of ‘not my problem’ attitude, and I think we have to counter that.”

Money raised by the auction will go to the Global Fund to Fight AIDS, Tuberculosis and Malaria and to Gates’ Rebuild Foundation, which works with deprived communities in Chicago.

One criticism sometimes made of charities like (RED), which has persuaded big companies including Bank of America, Starbucks and Apple to promote AIDS awareness, is that its work lets politicians and governments off the hook.
Bono argues that “the point is to put them back on the hook.”

“Making something popular makes the politicians have to pay attention,” he said. “And we’re going to need that more than ever” in an era of growing nationalism.

“Women are the rising category (of infections) at the moment, and whilst the world is looking the other way in this rather childish fight among strongmen across the world, these budgets are being cut and women are paying the highest price.

“It’s really deeply upsetting for us all,” he added. “Because we were really getting excited. We thought, we’re at the point of inflection. And now we hear, ‘No, no. We’re going to cut these budgets.’ It’s not just America. A lot of countries are putting themselves first. At least they think it’s first — but as you know global health crises don’t respect borders.”

Artworks in the auction will be exhibited by Gagosian at the Moore Building in Miami from Dec. 1 to Dec. 7. They will be sold in a live auction Dec. 5 and an online sale that is open for bidding Nov. 12-Dec. 7. /ee