Mother of missing UP student asks Palparan to tell the truth 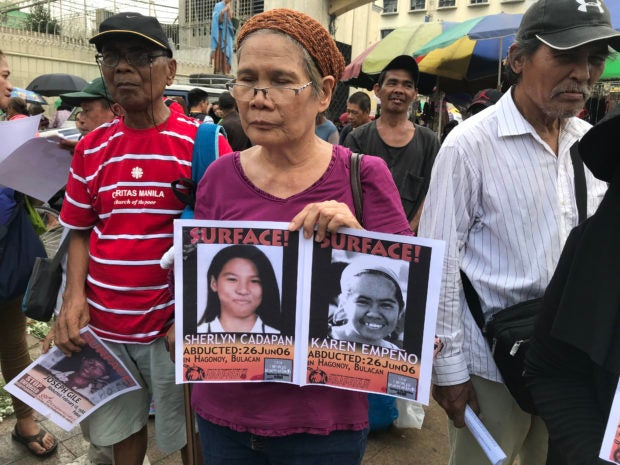 Linda Cadapan, mother of missing UP student Sherlyn Cadapan, holds a photo of her daughter and of another student, Karen Empeno. INQUIRER.net photo / Faye Orellana

The family of University of the Philippines (UP) student Sherlyn Cadapan urged on Friday former Army Major General Jovito Palparan to speak out the truth concerning the student’s disappearance in order for the family to start the process of “moving on.”

According to Linda Cadapan, mother of Sherlyn, it was not enough for Palparan to be jailed at the national penitentiary after being found guilty of kidnapping.

The mother said that the only thing that would make the family to move on from this harrowing experience is to know the underlying facts on the disappearance of her daughter.

Linda also said she would go to the place where her daughter was supposedly killed to personally get the bones of Sherlyn.

Sherlyn, together with Karen Empeno, disappeared in 2006 after being kidnapped by Palparan, Lt. Col. Felipe Anotado, Jr. and Staff Sgt. Edgardo Osorio.

All three were convicted in September after the Malolos Regional Trial Court ruled that the three of them were guilty of kidnapping and serious illegal detention in the case of the UP students.

Linda also revealed that her life changed since the conviction of Palparan in September.

According to her, she received a number of death threats and was constantly being followed by unidentified men wherever she go.

Given the following circumstances, Linda said that she recently consulted a paranormal expert to know the state of Sherlyn.

Based on the words of the paranormal expert, Sherlyn and Karen were killed after being shot in the back.

Their dead bodies were then brought to a “jungle” where ordinary people could no longer reach, Linda said.

Despite the hunting effect of Sherlyn, Linda said that she has already accepted that her daughter is now gone.