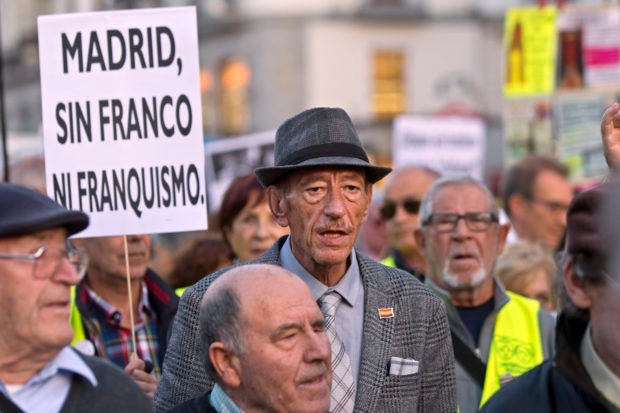 Protesters march in Madrid, Spain, Thursday Oct. 25, 2018. Hundreds of protesters in Madrid are urging government and Catholic church authorities to prevent the remains of the country’s 20th century dictator from ending in the city’s cathedral. Spain’s center-left government has promised to exhume this year Gen. Francisco Franco from a glorifying mausoleum, but the late dictator’s heirs have defied the plans by proposing for his remains to be relocated to a family crypt under the cathedral. Banner reads ‘ Madrid without Franco or Francoism’. (AP Photo/Paul White)

MADRID — An artist has been arrested after painting a dove in red on Gen. Francisco Franco’s tomb, an attack that comes as debate rages in Spain over the exhumation of the country’s 20th-century dictator.

Artist Enrique Tenreiro can be seen in a video shared online as he kneels before Franco’s tomb in the Valley of the Fallen, draws a dove and writes “for freedom” before security personnel take hold of him.

Police later arrested Tenreiro, according to a statement by Spain’s National Heritage department, which manages the glorifying mausoleum where Franco was interred in 1975.

The Spanish government has promised to relocate his remains before next year.

In a statement signed by the artist and emailed by aides, Tenreiro said he wanted to make a statement on behalf of Franco’s victims. /kga