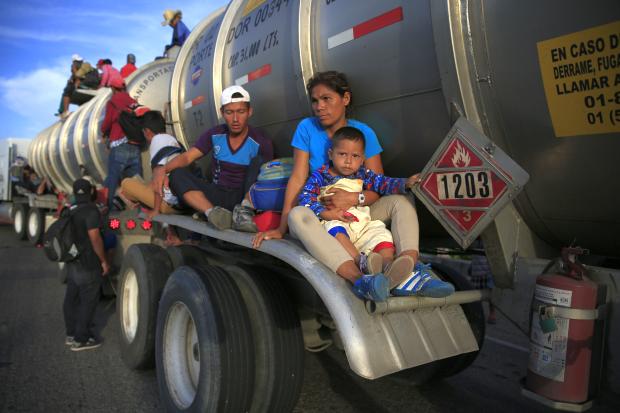 A woman holding her baby hitches a ride on the fender of a tanker, in Niltepec, Mexico, Tuesday, Oct. 30, 2018. The caravan of thousands of migrants is continuing its slow advance, setting off through Mexico’s narrow, windy isthmus for the Oaxaca state city of Juchitan, which was devastated by an earthquake in September last year. (Photo by REBECCA BLACKWELL / AP)

JUCHITAN, Mexico — Thousands of Central American migrants in a caravan traveling through Mexico planned to rest at least a day or longer in the southern city of Juchitan beginning Wednesday, hoping to organize mass transport northward after days of hard walking in tropical temperatures that have left them about 900 miles from the nearest U.S. border crossing.

A second, smaller group, of 1,000 or so migrants who forced their way into Mexico on Monday was trailing some 250 miles back, stopping for the night in the city of Tapachula.

At a Tuesday evening assembly, participants in the bigger group named a committee to negotiate with Mexican authorities over a possible “bridge plan” that could leapfrog them to the Mexico’s capital by bus. There was no indication from officials whether the request to transport the perhaps 4,000 people remaining in the group would be granted.

Starting out in Honduras more than two weeks ago, the caravan migrants have spent their nights camping out in the main squares of small cities in the southern states of Chiapas and now Oaxaca. But a deadly earthquake last year destroyed Juchitan’s central market, prompting it to be provisionally moved to the main square — meaning there was no room for them there.

Instead they spent the night on a municipal-owned lot on the outskirts of town where a high ceiling sheltered a cement floor. Outside the structure many more bedded down on blankets or cardboard sheets in the grass, with some lashing tarps to the foliage for rudimentary shelter.

Full tanks of water were set up for people to be able to bathe, and a large video screen showed soccer programming and then cartoons for the kids.

The two groups combined represent just a few days’ worth of the average flow of migrants to the United States. Similar caravans have occurred regularly over the years, passing largely unnoticed, but the new ones have become a hot-button political issue amid an unprecedented pushback from U.S. President Donald Trump.

With just a week to U.S. midterm elections, the Pentagon has announced it will deploy 5,200 troops to the Southwest border, and Trump has continued to tweet and speak about the migrants.

On Monday he said he wants to build tent cities to house asylum seekers, and Tuesday he floated the possibility of ending the constitutional right to U.S. citizenship for babies born in the country to noncitizens.

Experts widely dismissed the idea that the president could unilaterally change the rules on who is a citizen and said it’s highly questionable whether an act of Congress could do it, either.

“According to what they say, we are not going to be very welcome at the border,” Honduran migrant Levin Guillen said when asked about Trump. “But we are going to try.”

Guillen, a 23-year-old farmer from Corinto, Honduras, said he had been getting threats back home from the same people who killed his father 18 years ago. He has been on his own since his mother died four years ago, and he hopes to reach an aunt who lives in Los Angeles and have a chance to work and live in peace.

“We just want to a way to get to our final goal, which is the border,” he said.

Worn down from long miles of walking and frustrated by the slow progress, many migrants have been dropping out and returning home or applying for protected status in Mexico.

The initial group is already significantly diminished from its estimated peak at over 7,000-strong. A caravan in the spring ultimately fizzled to just about 200 people who reached the U.S. border at San Diego.

Deputy foreign ministers from El Salvador, Guatemala, Honduras and Mexico met Tuesday and agreed to coordinate “special attention” for the caravans, guaranteeing human rights, humanitarian assistance and “a safe, orderly and regular migration” in accordance with each country’s laws.

Mexico’s Interior Department said two Hondurans who requested entry were identified as having arrest warrants back home, one drug-related and the other for suspected homicide. They were deported.

The department said in a statement that the men were part of “the migrant caravan,” but did not say which group or specify when they were detained at checkpoints in the southern state of Chiapas.

Echoing their countrymen in the initial caravan, Hondurans in the second group talked of fleeing poverty and gang violence in one of the world’s deadliest countries by homicide rates. They said asylum in the United States is their primary goal, but some expressed openness to applying for protected status in Mexico if that doesn’t work out.

“Continue on to the United States, that is the first objective,” said Carlos Enrique Carcamo, a 50-year-old boat mechanic. “But if that’s not possible, well, permission here in Mexico to work or stay here.”

Gerbert Hinestrosa, a 54-year-old traveling with his wife and teenage son, said he realizes it will be hard to achieve his dream of reaching the U.S.

“Right now I feel good,” he said. “We have barely started, but I think it is going to be very difficult.” /atm