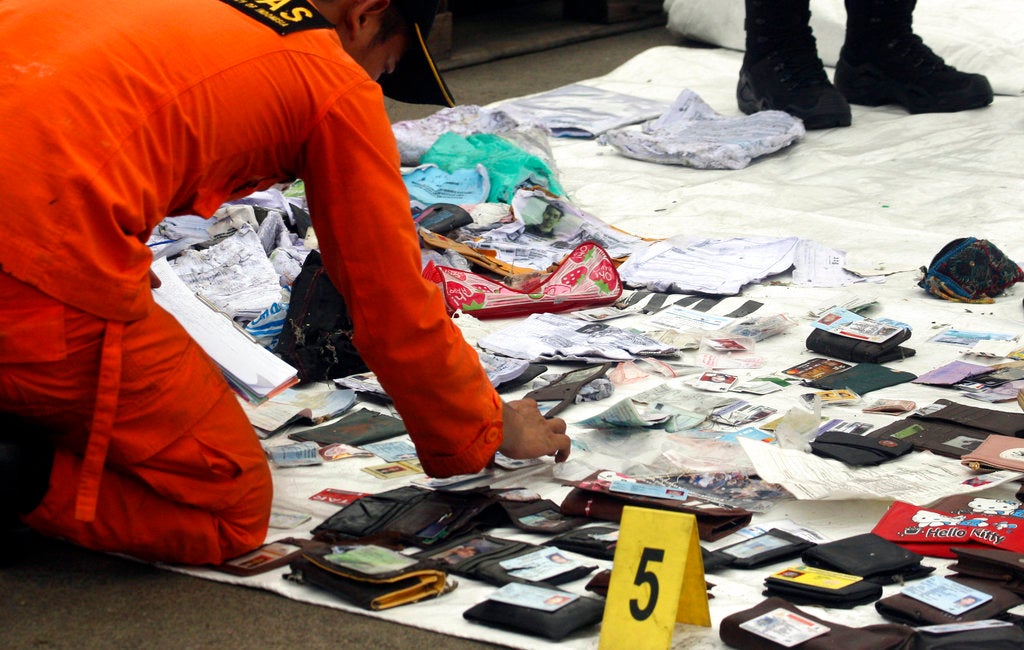 A rescuer checks personal belongings recovered from the area where a Lion Air plane is suspected to crash, at Tanjung Priok Port in Jakarta, Indonesia, Tuesday, Oct. 30, 2018. Search and rescue personnel worked through the night to find victims of the Lion Air plane crash in Indonesia. (AP Photo/Binsar Bakkara)

JAKARTA, Indonesia — Divers searched Tuesday for victims of the Lion Air plane crash in Indonesia that killed 189 people and high-tech equipment was deployed to find its data recorders as reports emerged of problems on the jet’s previous flight that had terrified passengers.

Search and rescue personnel worked through the night, sending 26 body bags to identification experts while the airline flew dozens of grieving relatives to the country’s capital, Jakarta.

The 2-month-old Boeing jet crashed into the Java Sea early Monday, just 13 minutes after taking off from Jakarta for an island off Sumatra. Its pilot had requested clearance to return to the airport just 2-3 minutes after takeoff, which aviation experts said indicated a problem, though its cause is still baffling.

The National Search and Rescue Agency said that 10 intact bodies as well as body parts have been recovered. Aircraft debris and personal belongings from ID cards to clothing and bags found scattered in seas northeast of Jakarta are being spread out on tarps at a port in north Jakarta.

The disaster has reignited concerns about safety in Indonesia’s fast-growing aviation industry, which was recently removed from European Union and U.S. blacklists.

Two passengers on the plane’s previous flight from Bali to Jakarta on Sunday have described issues that caused frustration and alarm.

“About three to eight minutes after it took off, I felt like the plane was losing power and unable to rise. That happened several times during the flight,” he said. “We felt like in a roller coaster. Some passengers began to panic and vomit.”

His account is consistent with data from flight-tracking sites that show erratic speed, altitude and direction in the minutes after the Boeing 737 MAX 8 jet took off. A similar pattern is also seen in data pinged from Monday’s fatal flight. Safety experts cautioned, however, that the data must be checked for accuracy against the plane’s so-called black boxes, which officials are confident will be recovered.

Lion Air’s president Edward Sirait said there were reports of technical problems with the flight from Bali but said it had been resolved in accordance with the procedures released by the plane manufacturer.

In a detailed post online, Indonesian TV presenter Conchita Caroline said boarding of Sunday’s flight was delayed by more than an hour and when the plane was being towed, a technical problem forced it to return to its parking space.

She said passengers sat in the cabin without air conditioning for at least 30 minutes listening to an “unusual” engine roar, while some children vomited from the overbearing heat, until staff faced with rising anger let them disembark.

After about 30 minutes of passengers waiting on the tarmac, they were told to board again while an engine was checked.

Caroline said she queried a staff member but was met with a defensive response.

“He just showed me the flight permit that he had signed and he said the problem had been settled,” she said. “He treated me like a passenger full of disturbing dramas even though what I was asking represented friends and confused tourists who didn’t understand Indonesian.”

Distraught family members struggled to comprehend the sudden loss of loved ones in the crash of a plane with experienced pilots in fine weather.

“This is a very difficult time for our family,” said Leo Sihombing, outside a crisis center set up for family members at Jakarta’s Soekarno-Hatta airport.

“We know that it is very unlikely that my cousin is still alive, but no one can provide any certainty or explanation,” he said as other family members wept and hugged each other.

“What we hope now is rescuers can find his body, so we can bury him properly, and authorities can reveal what caused the plane crash,” Sihombing said.

More than 800 people from multiple agencies are involved in the search, which was Tuesday expanded to a 10 nautical mile area. Specialist ships and remotely operated underwater vehicles have been deployed to search for the plane’s hull and flight recorders.

Search and Rescue Agency chief Muhammad Syaugi said search teams are going “all out” to locate the aircraft’s fuselage.

He has said he’s certain it won’t take long to locate the hull of the aircraft and its flight recorders due to the relatively shallow 30 meter (115 foot) depth of the waters where it crashed.

Indonesian airlines were barred in 2007 from flying to Europe because of safety concerns, though several were allowed to resume services in the following decade. The ban was completely lifted in June. The U.S. lifted a decade long ban in 2016.

Lion Air, a discount carrier, is one Indonesia’s youngest and biggest airlines, flying to dozens of domestic and international destinations. Earlier this year it confirmed a deal to buy 50 new Boeing narrow-body aircraft worth an estimated $6.2 billion. It has been expanding aggressively in Southeast Asia, a fast-growing region of more than 600 million people.  /muf