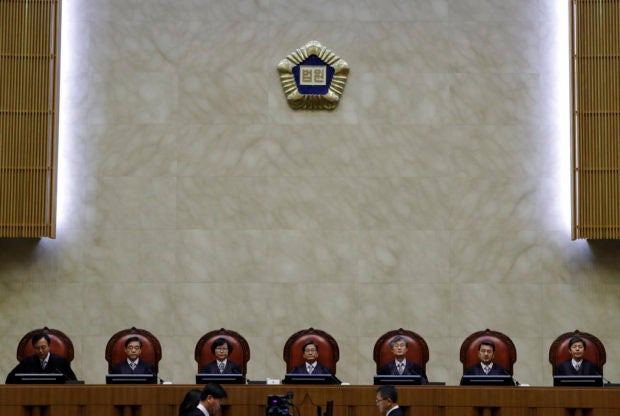 South Korean Chief Justice of the Supreme Court KIM Myeongsu, center, sits with other justices upon their arrival at the Supreme Court in Seoul, South Korea, Tuesday, Oct. 30, 2018. South Korea’s Supreme Court has ruled that a Japanese steelmaker should compensate four South Koreans for forced labor during Japan’s colonial rule of the Korean Peninsula before the end of World War II. (AP Photo/Lee Jin-man)

SEOUL — In a potentially far-reaching decision, South Korea’s Supreme Court has ruled that a Japanese steelmaker should compensate four South Koreans for forced labor during Japan’s colonial rule of the Korean Peninsula before the end of World War II.

The long-awaited ruling, delivered after more than five years of deliberation at Seoul’s top court, could have larger implications for similar lawsuits that are pending in South Korea and will likely trigger a diplomatic row between the Asian U.S. allies.

South Korea’s Foreign Ministry spokesman Noh Kyu-duk said Tokyo and Seoul “should gather wisdom” to prevent the ruling from negatively affecting their relations. Japanese media earlier quoted Japanese officials as saying that Tokyo would consider taking the forced labor case to the International Court of Justice if the countries fail to resolve the issue diplomatically.

The court said Japan’s Nippon Steel & Sumitomo Metal Corporation should compensate 100 million won ($87,680) each to four plaintiffs. Among them, only 94-year-old Lee Chun-sik has survived the legal battle that extended for nearly 14 years.

“I won the case but I am here alone, so I am sad, a lot of tears are coming out,” an emotional Lee told reporters after the ruling. “It would have been good if we were still here altogether.”

The court rejected Nippon Steel’s argument that the matter of compensating forced laborers had already been settled by a 1965 treaty between the governments to restore diplomatic ties. The court also rejected the company’s argument that it was a different entity from the steelmaker that employed the South Koreans during the war.

Tokyo maintains that the $500 million Japan provided to South Korea under the 1965 treaty was meant to permanently settle all wartime compensation issues. But the Supreme Court in Tuesday’s ruling said the treaty does not terminate individuals’ rights to seek compensation for the “inhumane illegal” experiences they were forced into.

ADVERTISEMENT
Read Next
BI nabs Ghanaian national for using fake visa
EDITORS' PICK
Water remains our saving grace right now
Gabby’s resignation from ABS-CBN paves way for next generation Lopezes to take up new challenge
What’s happening to the ICT Industry and its role in helping businesses today
52 new COVID-19 cases: Baguio’s single day record so far
Comelec exploring possibility of holding 2022 elections for 2-3 days
More Cebu schools are now powered by Smart
MOST READ
ABS-CBN chairman Gabby Lopez resigns from network, other Lopez-owned firms
US Congress bill seeks to halt assistance to PH police, military
Suspension of US security aid to PH ‘not only our loss but theirs as well’ — Lacson
AFP, PNP disown pro-Duterte accounts shut down by Facebook
Don't miss out on the latest news and information.