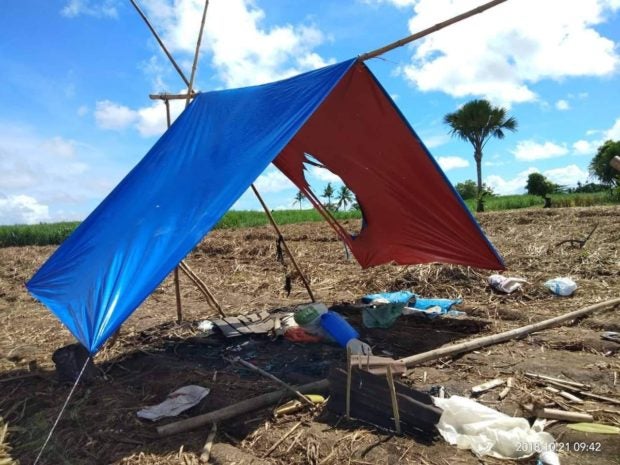 The site in Hacienda Nene where nine farmers were massacred by unidentified gunmen on Saturday, October 20, 2018. Photo from Police Regional Office 6

The father of the 14-year-old witness in the massacre of nine farmers in Sagay City, Negros Occidental, is eyeing to file kidnapping charges against members of the human rights group Karapatan, police chief Director General Oscar Albayalde said Monday.

Albayalde said the group allegedly took custody of the minor and his mother without the father’s consent.

“The father of the lone witness, who is a 14-year-old minor, is mulling the filing of kidnapping charges against some members of Karapatan, who took custody of the minor and his mother without his consent,” he said in a press briefing.

The National Federation of Sugar Workers (NFSW), the organization of the slain farmers, earlier claimed that the police “illegally arrested” the minor.

The PNP denied this claim, saying all the eight witnesses including the minor, who is the prime witness in the killing, were “willing” to give their testimonies.

Police said the minor was turned over to the Local Social Welfare Development Officer, who also witnessed the taking of his statement by investigators.

The PNP has also filed multiple murder charges against two members of the NFSW and five other John Does, who allegedly recruited the slain farmers to their organization days before they were killed. /cbb