Looking for Larry Alcala: Slices of a creative life

Back when newspapers and magazines could still hold their own against online news, readers engaged in a weekly “head hunt” in the comics section. The objective: to spot a cartoonist’s caricature of his profile cleverly hidden within the images in an illustration. No reward was to be had, save for the simple joy of finding the quarry, in effect, outwitting other searchers and the author of the game himself.

For 20 years, Lauro “Larry” Alcala had Filipino readers sleuthing and hunting him down while seeing themselves in similar familiar situations in “Slice of Life.”

Unlike a comic strip, which delivers the punchline or forms a narrative in a series of frames, “Slice” presented a lighthearted commentary in a single tableau mirroring ordinary Filipino life.

Depicting scenes such as town fiestas, school opening, Election Day and other newsworthy events, it was the most popular of the 20 comic strips he created over 50 years, Alcala himself said in an interview in 2001.

The use of nonverbal communication enables “Slice” to be appreciated by a bigger audience, he explained. Posing no language barrier, it gets the message across even in exhibits abroad.

Inspired by filmmaker Alfred Hitchcock’s sneaking in and out of movie scenes, “Slice” was a testament to Alcala’s endearing traits — observant, unassuming, and with a strong sense of kinship.

First seen in 1980 in a magazine and then in another one, “Slice” appeared next in a national daily, where it continued till 2002, when Alcala succumbed to a heart attack at age 75. No surprise that it is what Alcala is best remembered for.

In 2016, when Alcala would have turned 90, his grandchildren turned to the iconic cartoon to honor the memory of their grandfather.

They launched a sticker campaign emulating the “Look-for-Larry-Alcala” game popularized by the cartoon, not in traditional print media this time, but on social media.

They gave away stickers of the cartoonist’s profile caricature, with a mission for the recipients to post them in places they frequent or visit, take pictures of the spots with the “embedded” image and post on Instagram, using the hashtag #LarryAlcala90 (https://www.instagram.com/larryalcalaofficial/).

“We felt it was time to bring lolo’s legacy to the consciousness of younger Filipinos,” says oldest granddaughter, Ana, a film major at the University of the Philippines (UP) College of Mass Communication now working as a copy writer in an ad agency. 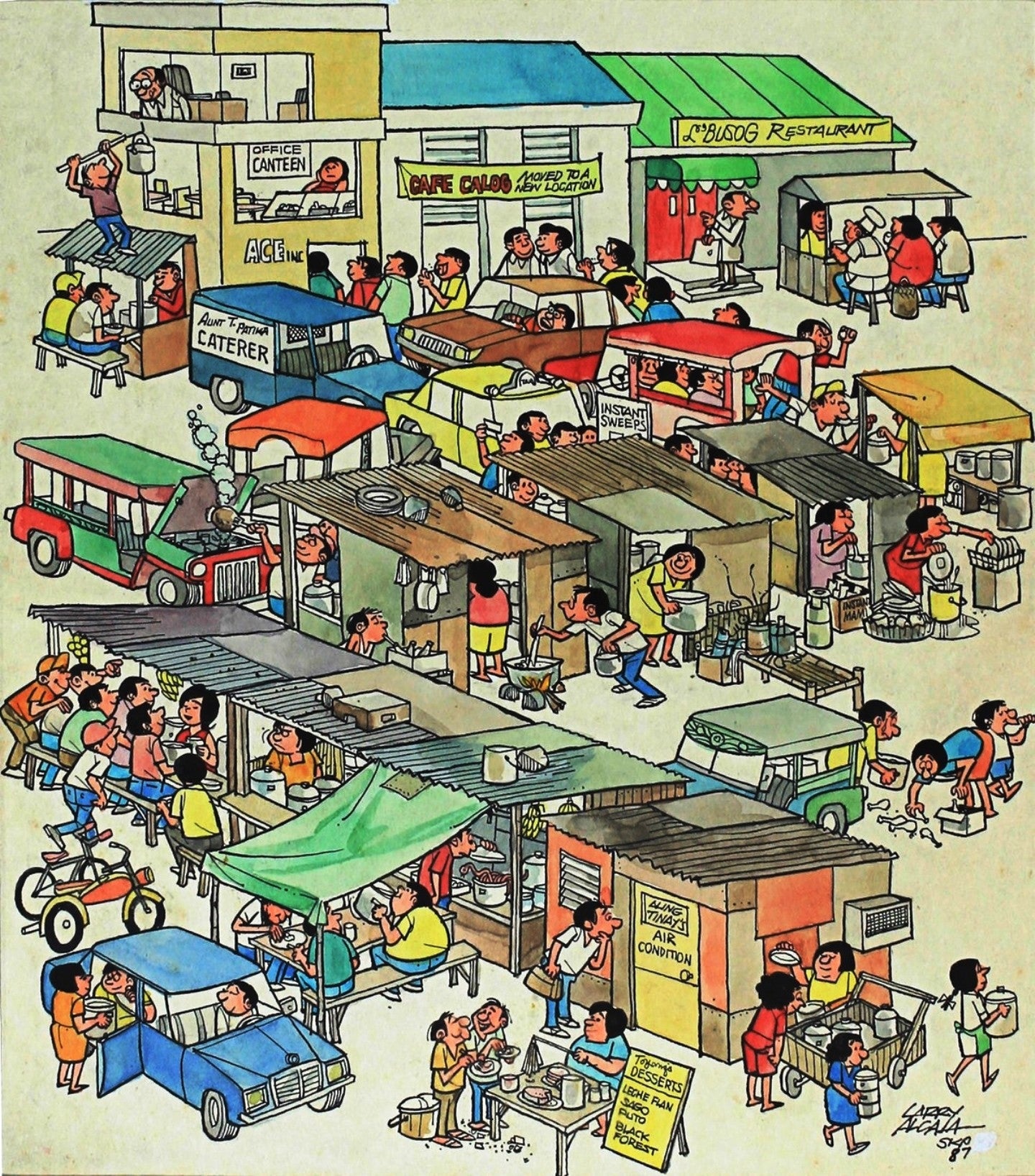 HEAD HUNTING EXPEDITION Readers of Lauro “Larry” Alcala’s popular “Slice of Life” cartoon took delight in trying to find the caricature of his profile (above), cleverly hidden among the characters, places and situations he depicted. 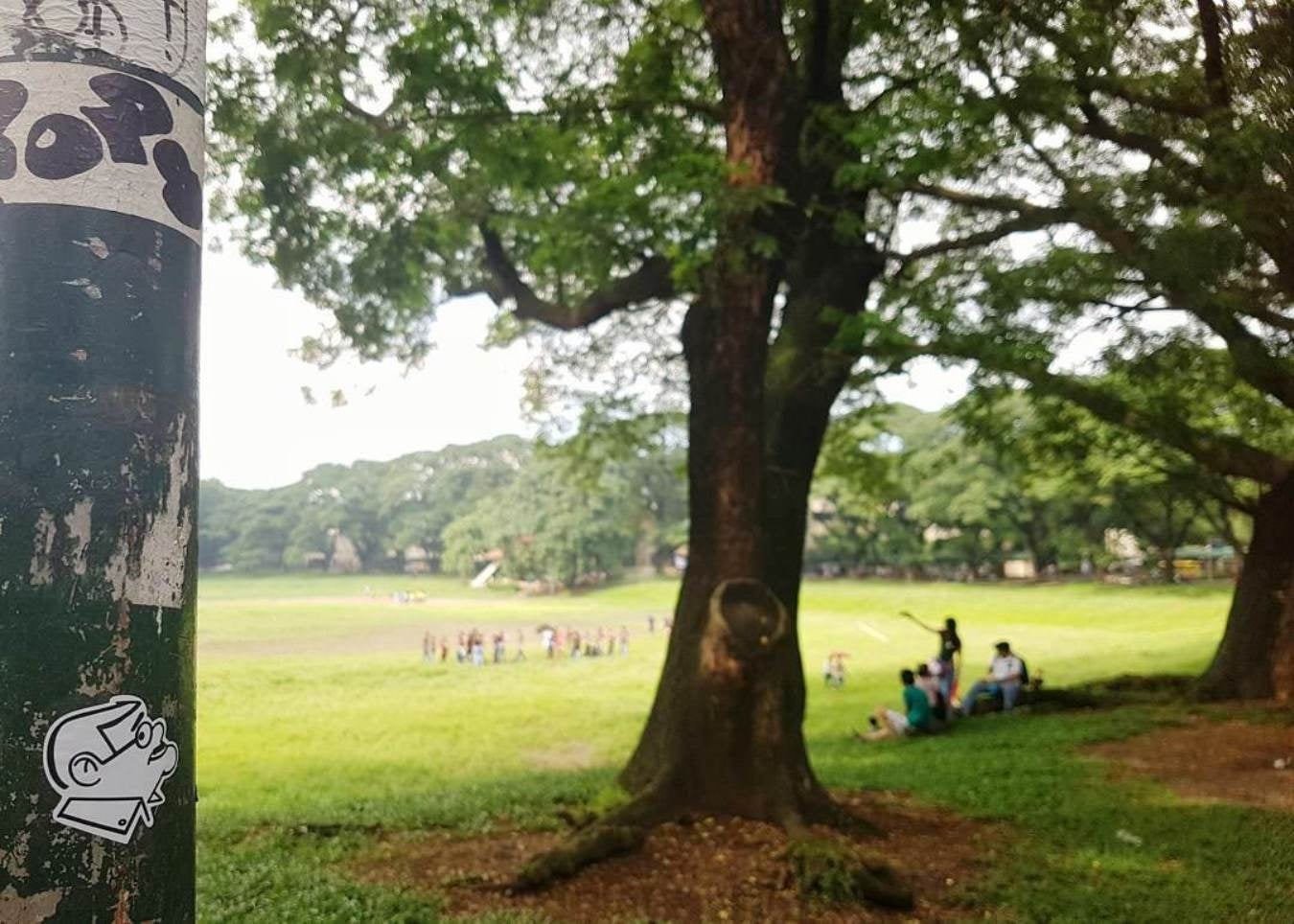 “Whenever his name is mentioned, people in their thirties and older bring up fond memories of looking through his work in a Sunday paper … But for many younger people, his name doesn’t even ring a bell,” she laments.

The idea was for the sticker campaign to revive the appeal of the well-loved cartoon, which gave readers a sense of affinity with the revered artist amid glimpses of everyday life.

Although the effort yielded modest results (they did not publicize it), it encouraged Ana and her siblings to do it again. And what better time than now, in celebration of their lolo’s conferment of the Order of National Artist for Visual Arts in ceremonies held in Malacañang on Oct. 24.

Ana, assisted by a sister, Angela, a UP Fine Arts graduate, has also been maintaining the Larry Alcala Facebook account for over a decade now (https://www.facebook.com/OfficialLarryAlcala/).

It is a modernized version of the original started by their father, Lauro Jr., when Lauro Sr. was still alive.

Being both in advertising, the girls know that today, “brands reach out to their audience primarily through digital … specifically social media,” Ana says.

Ready to lend a hand are their three sisters: Angelica, an architect; Andrea, a business administration graduate; and Ivy, a fine arts sophomore.

Their dedication to their lolo’s work is reminiscent of the interest their father and his siblings, Lamberto and Lizette, have shown.

In their youth, the trio would often kibitz as the elder Alcala brought to life his many characters, offering suggestions, even teasing their father whenever they found a joke corny.

Alcala took it all in good humor, never fussing even if he had to rework a thought balloon.

When he retired from teaching in 1996, the Albay-born Alcala relocated to Bacolod, where a younger brother, Vic, a businessman, had settled years earlier.

He continued to produce cartoons, faxing his daily comic strip, while Lizette would scan and e-mail weekly “Slice” colored cartoons to publications in Manila.

Ana reports that the Larry Alcala website has been growing steadily. They get a lot of inquiries about purchasing original artwork or authenticating their Alcala pieces; or about the availability of coffee-table books of their grandfather’s work. There’s a plan to produce the latter, Ana intimates.

Elevating the girls’ vision to preserve Alcala’s legacy and secure his stature with an official act is Ruben de Jesus, a professor at UP College of Fine Arts, whom Lauro Jr. credits with “championing my dad’s cause and spearheading his nomination to the National Commission for Culture and the Arts (NCCA).”

De Jesus is a visual communication graduate of UP but was never under Alcala; he came to know more about the man when he himself started teaching. Among his students are two Alcala granddaughters.

In 1991, De Jesus was invited to participate in a workshop on children’s book illustration, organized by Philippine Board on Books for Young People (PBBY) and Goethe-Institut Manila-German Cultural Center. Alcala was one of the PBBY founders and the illustrators’ representative then.

From that workshop sprang the pioneering Ang Ilustrador ng Kabataan, or Ang INK. Eventually, De Jesus became an illustrator of children’s books, and also a board member of PBBY, which holds the annual illustrators competition, PBBY-Alcala Prize.

While in academe, he was the proponent of the visual communication program, even designing the department’s logo, recounts De Jesus.

“As a teacher and mentor, I am guided by that Alcala spirit that encourages visual learning in a positive and productive manner,” he says.

It was as PBBY illustrators’ sectoral representative that De Jesus proposed to the board his plan to nominate Alcala to the NCCA.

He believed Alcala deserved a second nomination (the first was in 2001). Two items in the selection criteria further convinced him that Alcala was about to be named national artist: 1) “artists, who through content and form of their works have contributed in building a Filipino sense of nationhood,” and 2) “artists who have pioneered in a mode of creative expression or style, thus … making an impact on succeeding generations of artists.”

De Jesus sums up his nomination this way: “Most of all, his art can be appreciated by Filipinos from all levels of society. There is mastery in his simplicity. There are messages in his images. His galleries are the dailies.

“Amidst all the imperfections and struggles we have to face, we can still go back and look for those positive values that have been hidden in the noise and chaos that we also created.”

Looking for Larry Alcala? He will always be just ‘round the corner. His family, fellow artists and followers will see to that. —CONTRIBUTED

The author worked in the Inquirer, also in Times Journal and Daily Globe (now both defunct), and is now consultant in a telco.