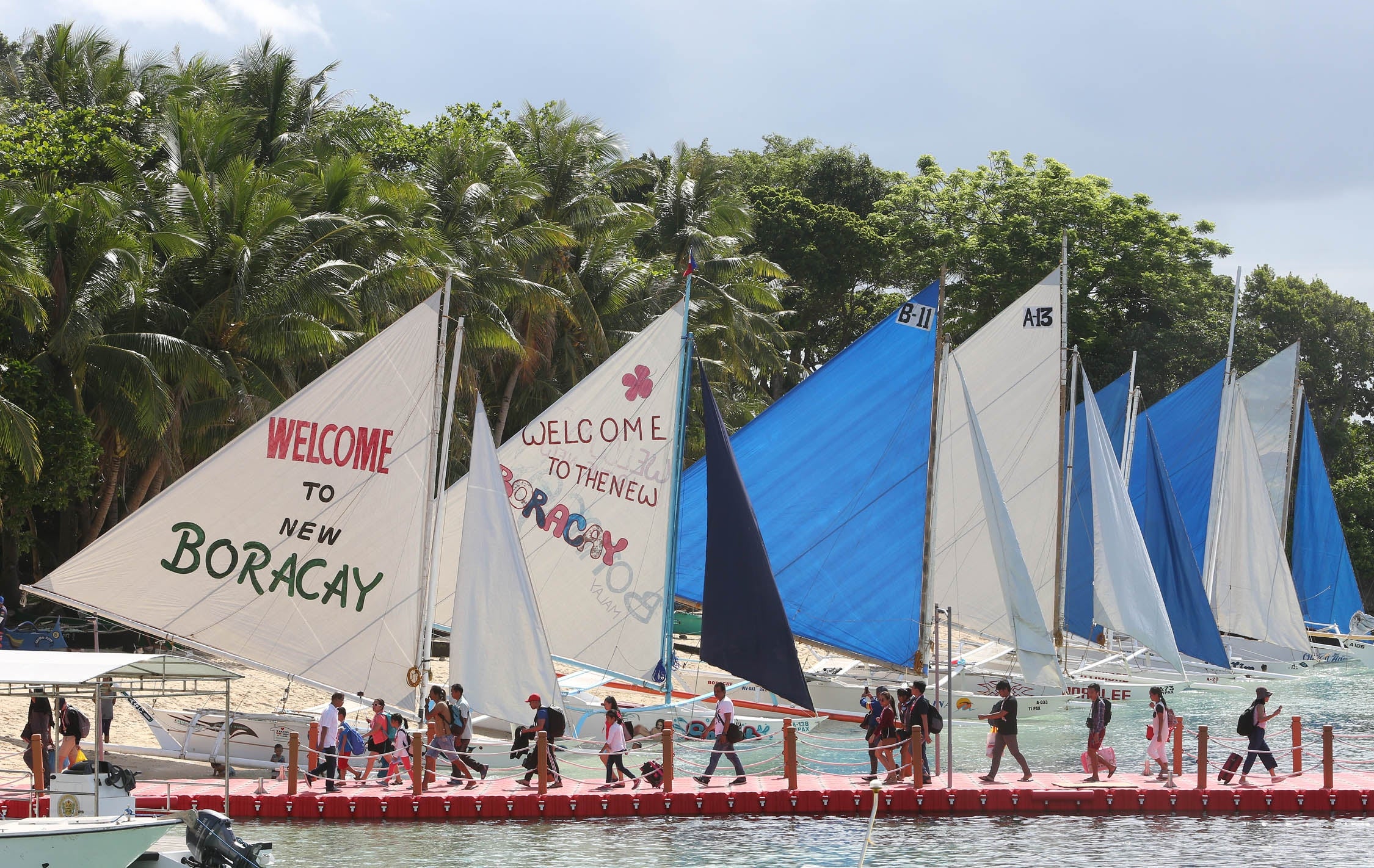 THEY’RE BAAAAACK Local and foreign tourists return to Boracay on its reopening on Friday. The resort island was closed to tourists for six months for cleanup and rehabilitation, and now limits the number of visitors to about 6,000 a day. —MARIANNE BERMUDEZ

“Celebrating my 28th birthday here makes it extra special,” Mercado said, panning her GoPro camera for a video of her surroundings before hopping on a tricycle en route to her hotel near White Beach.

Mercado and her friend, Abie Pepanio, were among the first batch of tourists to set foot on Boracay on Day One of its reopening after a six-month government-initiated rehabilitation.

“Our main problem right now is making sure we enforce the carrying capacity,” said Tourism Secretary Bernadette Romulo-Puyat, adding that tourists had been so impressed with what the government had done that “everybody wants to come.”

The highly anticipated tourist arrivals also offered a promise of better times for locals, some 20,000 of whom had lost their jobs when the island was shut down in April.

To avoid a repeat of the abuse and neglect from too many tourists, the Boracay Inter-Agency Task Force (BIATF) has set the limit on arrivals to 6,405 guests daily.

But data from Caticlan Jetty Port revealed that as of noontime on Friday, only 3,777 people had entered the island, 1,121 of them tourists staying for more than a day.

In her speech during the opening program at Cagban Port here, Puyat urged visitors to “be responsible tourists to help preserve a national treasure.”

She added: “The Boracay experience is the ultimate lesson in balancing development and protecting the environment. The lessons learned here are not for Boracay alone, but also for other destinations around our beautiful country.”

But residents and tourists expressed dismay over Boracay’s unfinished roads and drainage constructions that could affect the island’s sanitation.

“The problem is, [government workers] only rush things whenever VIPs are expected to visit,” said a Boracay resident who drives a tricycle for a living.

BIATF officials conceded that rehabilitation work was far from over, with Public Works Secretary Mark Villar himself saying that infrastructure work was only 80 percent complete, with the widening and upgrading of the 4.2-kilometer circumferential road expected to be completed by the first week of December.

Environment Secretary Roy Cimatu said the six-month closure was only the first phase of rehabilitation meant to address the island’s “cesspool” tag. 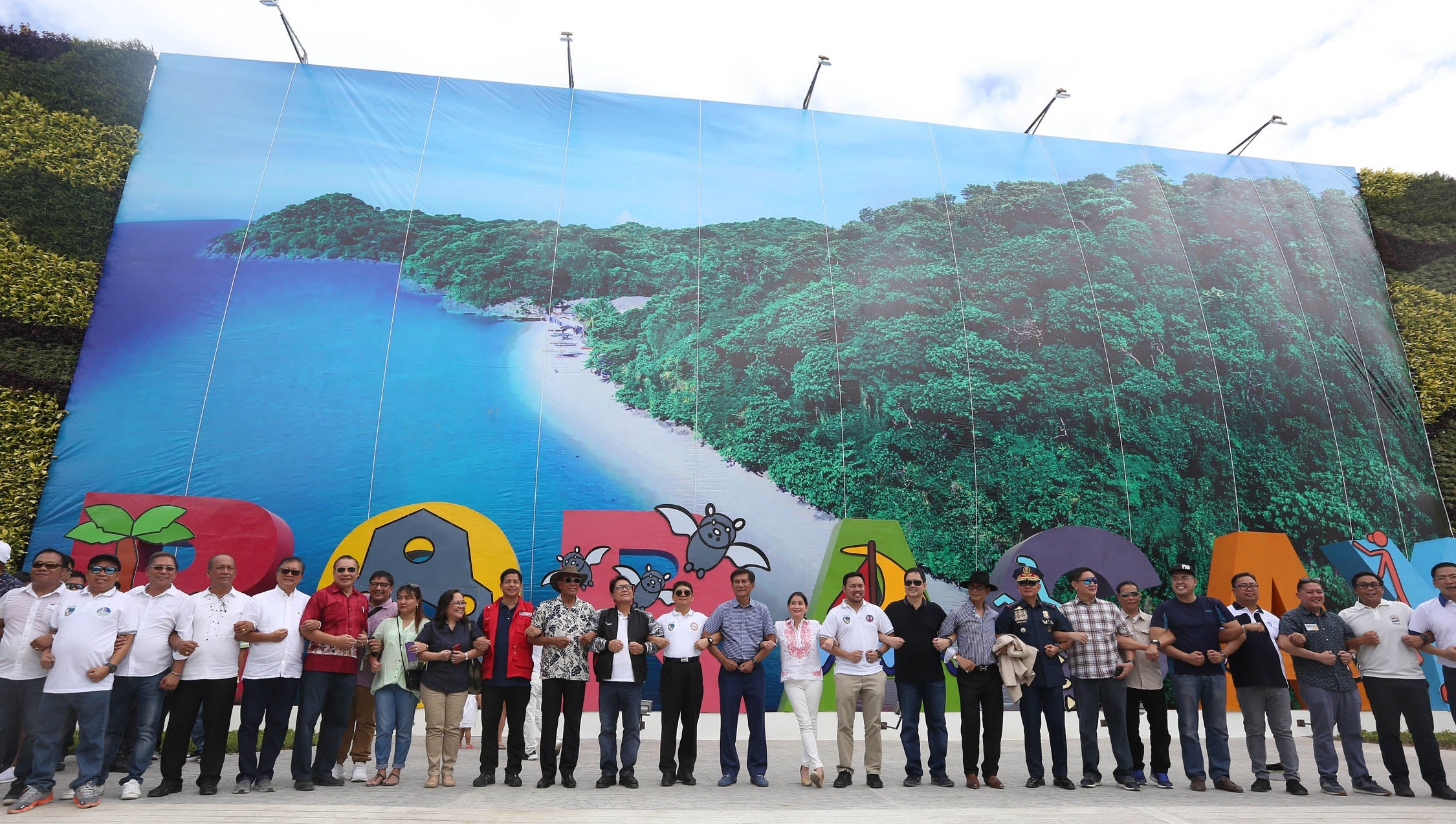 “The mandate of the task force is for two years. We will slowly transition from pure rehabilitation into a tourism organization-led [undertaking] within that two-year period,” he said.

In the Senate, Senators Nancy Binay and Sonny Angara said it was high time that the government turned its attention to other prime tourist destinations, including El Nido in Palawan and Panglao in Bohol.

Binay, who chairs the Senate tourism panel, recalled that the Department of Tourism had previously written the local government of El Nido, Palawan, regarding environmental issues such as trash disposal.

Boracay’s rehabilitation can be “a template in rejuvenating other tourist spots, but without the economic dislocation caused by the six-month shutdown of the world’s best island,” Angara said in a statement.

“The idea is to apply preemptive measures on tourism areas that show early signs of distress before it becomes a full-blown crisis that will be costlier to correct,” he added.

Only 157 of Boracay’s hundreds of hotels, inns, restaurants and souvenir shops have reopened after complying with regulations, including connecting to authorized sewer pipes and maintaining a 30-meter distance from the beach waters. —WITH REPORTS FROM DJ YAP AND AP