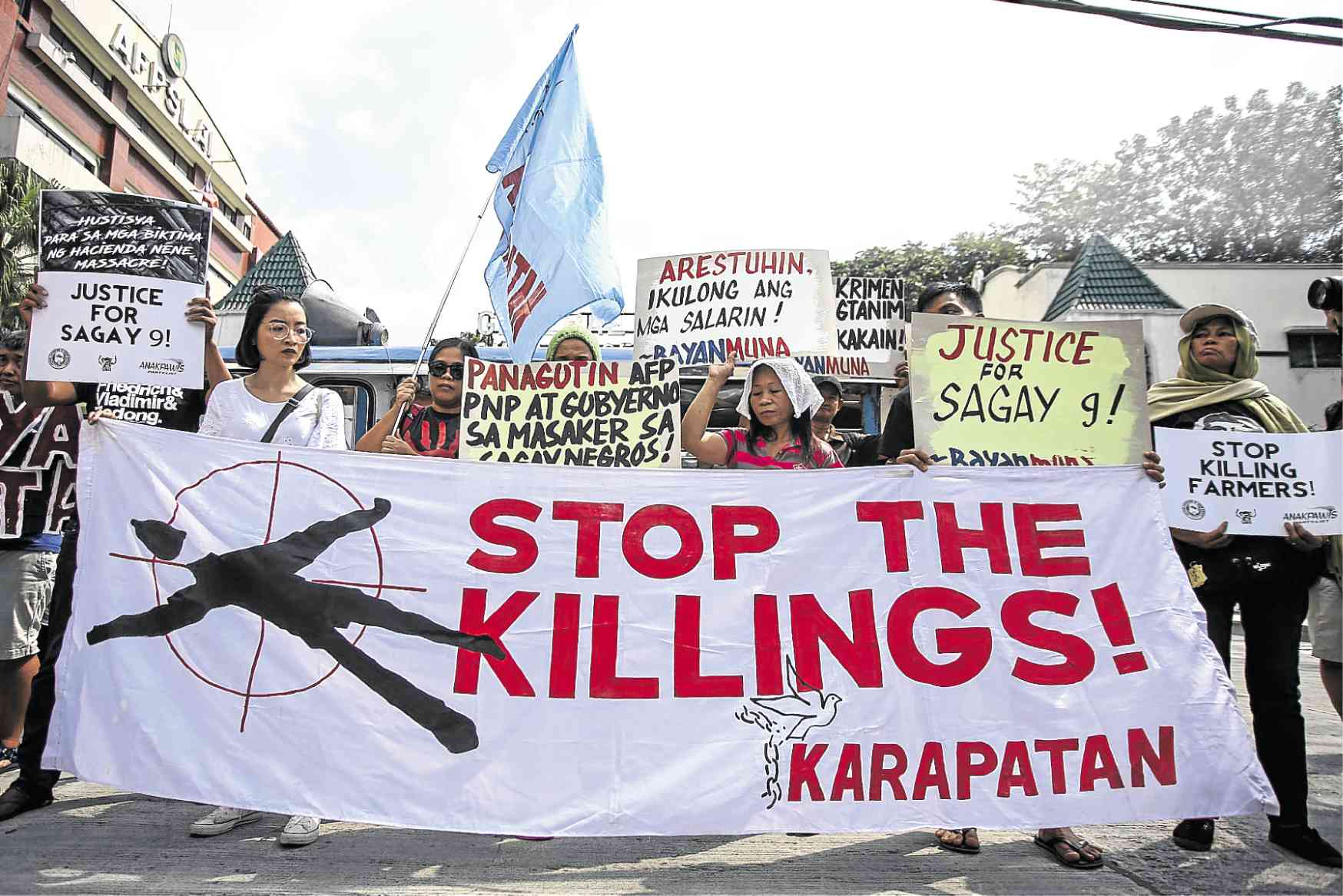 JUSTICE FOR ‘SAGAY 9’ Farmers press for a thorough investigation of Saturday night’s killing of nine farmers in Sagay City at a rally outside Camp Aguinaldo in Quezon City on Monday after authorities linked communist rebels to the deadly attack. —JAM STA. ROSA

The Philippine National Police is looking at four groups as the possible killers of nine sugarcane farmers in Negros Occidental province on Saturday: goons hired by the landowner, other land claimants, communist New People’s Army (NPA) insurgents, or militiamen.

Malacañang has blamed the killings on the NPA, the armed wing of the Communist Party of the Philippines (CPP).

Presidential spokesperson Salvador Panelo on Monday cited initial police findings pointing to the NPA as the group behind the killings.

“There are initial findings, which reveal that the [survivors] identified those who attacked them as members of the NPA,” Panelo said in a radio interview.

He said the farmers’ group was a “legal front” of the communist rebels.

The slain farmers, including four women and two minors, belonged to the National Federation of Sugar Workers (NFSW).

“[T]hose killed were recruited the day before they were killed,” Panelo said.

He said the government would use the full force of the law to bring the perpetrators to justice.

The Department of Agrarian Reform (DAR) said on Monday that the farmers were not agrarian reform beneficiaries and entered part of the disputed Hacienda Nene at Barangay Bulanon, Sagay City, illegally on Saturday.

On Saturday night, as the farmers were resting in a tent on the farm, five to seven gunmen came and opened fire, killing them all.

Killers not yet known

Chief Supt. John Bulalacao, Western Visayas police director, told reporters at PNP headquarters in Camp Crame, Quezon City, on Monday that the killers had not yet been identified.

He said the investigation was looking into the possibility that the landowner deployed goons to remove the farmers from the plantation.

“It is common knowledge in Negros that landowners there tend to assemble people and give them arms so they can help in [securing their lands],” Bulalacao said.

Other land claimants could also be involved in the attack, he said.

Earlier, he said, 40 farmers who had a deed of donation covering the plantation went to see the NFSW farmers and told them not to “squat” on their land.

Bulalacao said some of the 40 farmers were linked to the NPA or were supporters of the insurgents.

He said investigators were also looking at the possibility that the attack was carried out by militiamen because the military auxiliaries had a quarrel with NFSW in 2014 or 2015.

But investigators were leaning toward the NPA angle, he said, because of the communist campaign to discredit the government.

Bulalacao noted that NFSW was a “legal front” of the NPA.

“These victims [who were from other barangays and were not tenants of the hacienda] had been members of NFSW for only two days. They were brought to the hacienda to occupy [the land] and when they were settled there, the recruiters who allegedly were the core group of NFSW left [to go to a house to charge their cell phones] and a few minutes after that, the victims were gunned down,” Bulalacao said.

In this angle, he said, the victims were used as “bait.”

“That’s why we came up with our angle that this was perpetrated by the NPA in pursuance of their campaign to discredit the government,” Bulalacao said.

The militant Bagong Alyansang Makabayan (Bayan) slammed the PNP claim of NPA involvement in the killings.

“This allegation is bereft of any proof nor actual motive. The PNP is again trying to push the discredited ‘destabilization’ tale as the motive for the massacre,” Bayan secretary general Renato Reyes said on Monday.

Former Bayan Muna Rep. Neri Colmenares on Sunday called for an independent investigation, suggesting that the military could be involved in the killings.

Colmenares, who is from Negros Occidental, said Brig. Gen. Eliezer Losanes, commander of the 303rd Infantry Brigade, had previously accused farmers involved in the land cultivation system in the province of being NPA members.

On Monday, Defense Secretary Delfin Lorenzana said Colmenares’ accusation was “a cheap and indecent trick to burnish his image.”

Colmenares is running for the Senate in next year’s midterm elections.

The Makabayan bloc in the House of Representatives filed a resolution urging an inquiry into the killings.

Senators expressed outrage over the killings and called for an impartial investigation.

The Commission on Human Rights (CHR) condemned the killings and called on the government to give assurance that justice would be served for the victims.

Jacqueline de Guia, CHR spokesperson, said the government should also deal with the plight of the farmers.

“It is most disturbing that death becomes the price of claiming one’s rights,” De Guia said.

The DAR has launched an investigation of the killings.