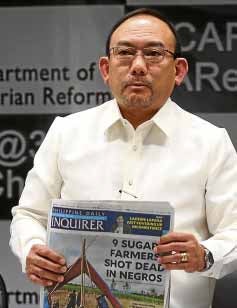 Labor groups on Monday renewed their call on the government to speed up the distribution of land to farmers in Negros Occidental after an agrarian dispute in the province erupted into violence on Saturday, costing the lives of nine farmers.

Leaders of the Negros Federation of Sugar Workers (NFSW), Trade Union Congress of the Philippines (TUCP) Negros chapter, and Save the Sugar Industry Movement said in separate interviews that the violence should serve as a “wake-up call” to the Department of Agrarian Reform (DAR) to work fast and give to the farmers the land that had been promised to them.

“[The] DAR should administer the distribution of lands seriously. [Up] to now the lands that [have been] promised to the farmers have not been given to them. This has dragged on for so long,” said NFSW leader Rolando Rillo.

‘This is what can happen’

“We’ve been telling them to distribute the lands now because this is what can happen. Farmers will do anything to earn a livelihood. They, too, get hungry,” Rillo said, referring to the occupation by 14 farmers of a disputed sugar plantation in Sagay City to plant vegetables to feed their families.

Nine of the farmers were resting in a tent on the plantation on Saturday night when five to seven gunmen arrived and opened fire, killing them all.

The victims were fresh recruits of NFSW.

“There were a lot of incidents like this that happened before,” TUCP-Negros leader Hernane Braza said. “[The] DAR should give this proper attention . . . There has been no proper turnover of land here and that is one of the lapses of [the] DAR.”

Wennie Sancho of Save the Sugar Industry Movement said that “[i]f land distribution would be delayed further, the lives of [farmers would] continue to be threatened.”

Negros Occidental has a history of bloody land feuds.

Fighting over the land

“There are groups fighting over that land,” Chief Insp. Roberto Mansueto, Sagay police chief, said on Sunday, referring to the 76-hectare Hacienda Nene at Barangay Bulanon, Sagay City, where the farmers were killed.

Agrarian Reform Secretary John Castriciones told reporters on Monday that the slain farmers were not agrarian reform beneficiaries and that they entered the hacienda illegally.

Luis Meinrado Pangulayan, agrarian reform undersecretary for legal affairs, said the land had not yet been placed under agrarian reform coverage due to “legal impediments.”

Rene Manlangit, a member of NFSW who survived the attack on Saturday, said on Monday that 32 farmers, “some of whom were among the fatalities,” applied for agrarian reform coverage at Hacienda Nene in 2000.

He said the application was not approved because the hacienda owner, Carmen Tolentino, had executed a deed of donation giving the plantation to 25 people.

Manlangit said the farmers also learned that the land was mortgaged to a bank.

“When a notice of coverage was issued in 2014 it was not approved because it was found that there were already 25 owners of the land,” Leonidas said.

Manlangit said the farmers pressed their application for agrarian reform coverage, but the DAR failed to act on it.

On Saturday, he said, the farmers entered the hacienda to till the land.

That night the gunmen came. —With a report from Carla P. Gomez