Sen. Antonio Trillanes IV saw a glimmer of hope in the country’s justice system on Monday when Judge Andres Soriano of the Makati Regional Trial Court (RTC) Branch 148 refused to order his arrest for coup d’état after President Rodrigo Duterte voided his 2011 amnesty.

“We want to thank Judge Soriano. Single-handedly, he upheld justice and the rule of law in our country despite the extreme pressure coming from the Duterte regime,” Trillanes told reporters after receiving a copy of the decision denying the petition of the Department of Justice (DOJ).

“We now see that there is hope in our country. And he is personified by Judge Soriano,” Trillanes added.

The President voided Trillanes’ amnesty in August, claiming the former military rebel failed to apply for amnesty and admit guilt in military mutinies against the government in 2003, 2006 and 2007. 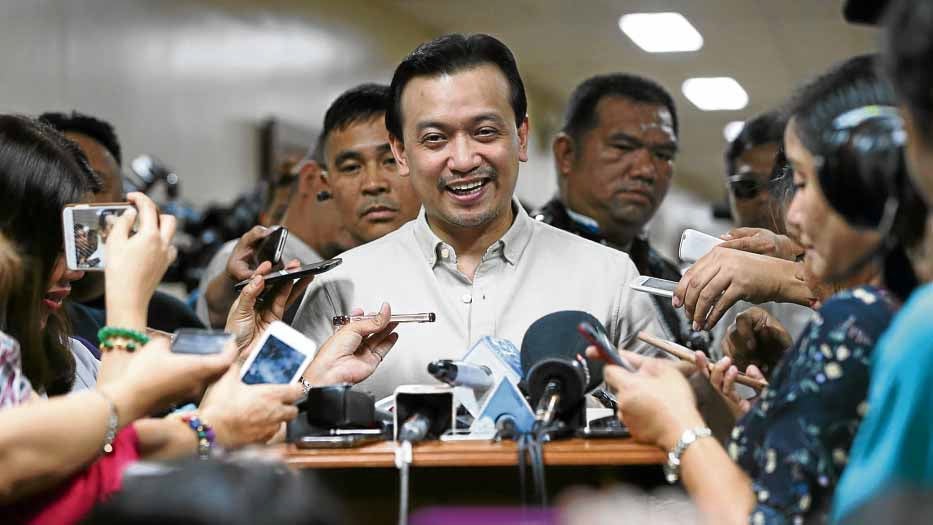 COURT RULING After Judge Andres Soriano’s refusal to issue an arrest order on Monday, Sen. Antonio Trillanes IV, one of the fiercest critics of the Duterte administration, says he expects Malacañang to continue going after him but that he is “energized” to face the threat. —EDWIN BACASMAS

The DOJ asked the Makati RTC Branches 148 and 150 to reopen the coup d’état and rebellion cases against Trillanes and order his arrest.

He applied for amnesty

In the rebellion case, Judge Elmo Alameda of the Makati RTC Branch 150 ruled for the government on Sept. 25. He ordered Trillanes’ arrest but allowed him bail.

But Judge Soriano found that based on evidence presented, Trillanes filed an application for amnesty in 2011 and with it his admission of guilt.

In denying the DOJ’s motion, Soriano said the court’s decision to dismiss the coup d’état charges against Trillanes in 2011, after he was granted amnesty by then President Benigno Aquino III, had become final and executory.

Soriano said there was “no reason to disturb” the long-established judicial doctrine that asserts that final and executory decisions were “immutable.”

“The court, in fact, loses jurisdiction over the case when its decision has become final and executory,” Soriano said.

“The law is vibrant. Jurisprudence is its lifeblood,” the judge said. “Subsequent jurisprudence may forge new horizons in which exceptions to the immutability of a final and executory judgment may be born.”

Soriano said, however, that his court would not be the one to set such a precedent.

But the judge also ruled that it was within President’s power to issue Proclamation No. 572, which voided Trillanes’ amnesty.

“Proclamation No. 572 is purely an executive act and prerogative in the exercise of the President’s power of control and supervision over all offices and agencies of the executive department,” Soriano said.

He said Trillanes failed to prove that the order “breached any constitutional guaranty, or that it has encroached on the constitutional power of either the judicial or the executive branch.”

“The Palace respects the constitutional independence of the judiciary and it will continue to do so,” presidential spokesperson Salvador Panelo said in a statement.

“It signifies that this administration is not engaged in the political persecution of its critics but is only enforcing the law against anyone who goes against its command,” he said.

Justice Secretary Menardo Guevarra said Trillanes could not claim victory, as Soriano’s ruling was not yet final.

He said the DOJ would appeal the decision to a higher court.

Trillanes said he expected the Duterte administration to continue going after him, but that he was “energized” to face such a threat.

“They will intensify their efforts, they will be more zealous, but I will be more energized to face them,” he said.

Trillanes said he would continue to do his job of opposing wrongdoing, and he would not be driven by hate.

“Nothing changes. I will be the same critic as I was before. I’m just upholding my role in our democracy as a member of the opposition,” he said.

He stressed that his role was crucial in a democracy.

“Those who are tired of me, don’t be because this is me. Just do your thing. Democracy needs people like me who will call out the mistakes of the administration and its abuses,” he said.

The next battlefield is the Supreme Court, where Trillanes has a pending petition challenging the constitutionality of the President’s proclamation voiding his amnesty.