Who gets your vote? Senatorial bets offer unique, odd promises

Banning internet games such as Defense of the Ancients (Dota) and changing the name of the Philippines to “Power of Maharlika Kingdom” were some of the political promises that senatorial hopefuls offered to the public as they filed their certificates of candidacy for the 2019 midterm elections.

From October 11 to 17, over 100 individuals gunning for a seat in the Senate lodged their formal bids before the Commission on Elections (Comelec) central office in Intramuros, Manila.

Some aspirants’ ideas to address the pressing problems in the country makes sense while others’ schemes border on ridiculous or simply nutty. 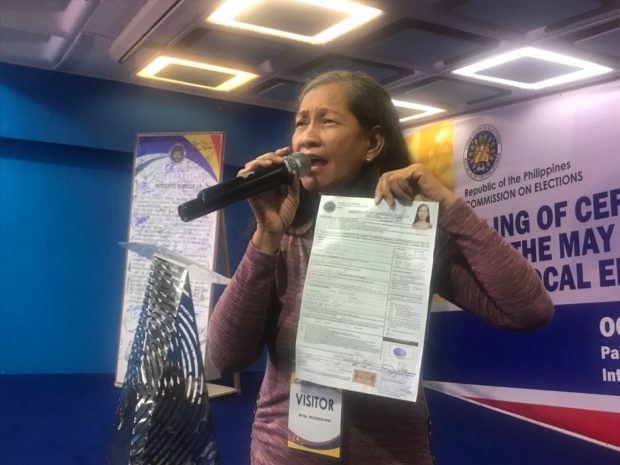 No to Dota, CoC

A woman-senatorial wannabe vowed to ban popular internet games such as Dota and Clash of Clans (CoC) should she win in the 2019 elections.

Bethsaida Lopez, claiming to be a “street educator,” asserted that internet games make its players become irresponsible as they would usually neglect their health for the games.

She also noted that online games promote vulgarity among students as it ruins their life.

Lopez said she will replace online games with educational ones that tackle school subjects.

‘Jesus’ is against death penalty

Another senatorial applicant strongly oppose the reimposition of death penalty in the country because he is “Jesus Christ.”

“No one can solve all the problems, only Jesus Christ. Kung hindi ako si Jesus Christ, hindi na ako tatakbo,” he said.

Talledo also insisted he was a good friend of President Rodrigo Duterte, and it was the President who convinced him to run for senator.

Meanwhile, former broadcaster Jiggy Manicad said he would propose a “cultural hour” on national television if he wins in next year’s polls.

He emphasized that a vibrant culture is important to a society because it promotes a sense of nationalism to its citizens.

LIVE: King Salam Emilio Delfin Sr. Y Lacan Luisong Tagean, who just filed his COC take the podium at the day 1 of COC filing at the Comelec headquarters in Intramuros.

Identifying himself as King Salam Emilio Delfin Lacan Luisong Tagean, he believes the country’s name should instead be “Power of Maharlika Kingdom.”

He also said it’s about time for the Philippines to have its own astronauts and cosmonauts, calling them “kinunot” — which is a known Bicolano dish.

But for him, kinunot stands for “a kingdom with new organization nationwide unite the technology.”

“If we have advanced technology, no country would meddle with us,” said the 50-year-old Naga resident.

Tagean also filed his senatorial candidacy during the 2013 elections but was declared a nuisance candidate.

Christian Castro filed his candidacy for senator in the 2019 elections with a plan to launch the “Piso para sa Puso (Peso for the Heart)” program, where every Filipino will be required to donate one peso for government programs, if he succeeds.

He said the program will help address the needs of the public, including those who require medical operations.

Castro also said that if he ever gets elected, he would work toward ensuring that “hao-siao” journalists would be taken care of and provided with such benefits as free housing.

The 40-year-old “publisher-editor” said that he feels for these individuals since they were not lucky enough to be accepted into credible news organizations. /kga