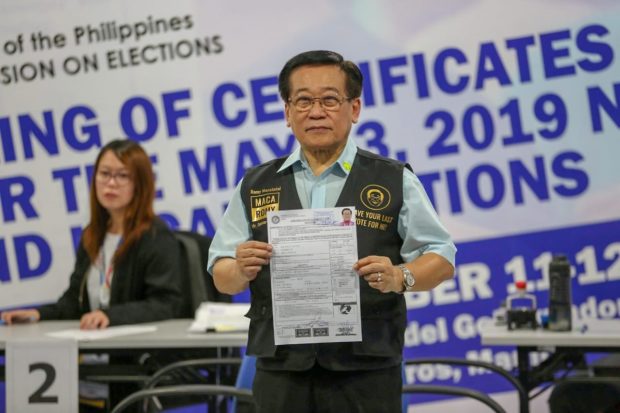 Veteran election lawyer Romulo Macalintal filed his certificate of candidacy (COC) for senator on Wednesday, completing the senatorial slate of the opposition coalition for the 2019 elections.

The 71-year-old Senate hopeful said he wants to advocate for the welfare of senior citizens in the country if he wins in next year’s polls.

(I will grow old, but I’ll leave behind laws that can serve you well in old age.)

Macalintal mentioned his proposed amendments to the Republic Act 10868 or the Centenarians Act of 2016, where he said the government should give P30,000 to senior citizens, aged 80 years old; another P30,000 when they reach 90; and another P40,000 at 100 years. An additional P50,000 every year should also be given if the senior citizens reach beyond 100 years.

Currently, this law only gives the centenarians P100,000 when they turn 100 years old.

Macalintal said the 20 percent discount for senior citizens for the purchase of goods and services should be raised to 30 percent at 70 years old and to 40 percent when they turn 80.

He added that a 50 percent discount for the purchase of medicines and medical services should also be given to senior citizens aged 90 and above.

Macalintal is the lead counsel of Vice President Leni Robredo in the electoral protest filed against her by former Senator Ferdinand “Bongbong” Marcos Jr.

Asked why he decided to enter politics after serving as an election lawyer for many years, he said he must have gotten the passion of his clients.

He completes the 8-member senatorial slate of Oposisyon Koalisyon, which is composed of the Liberal Party, Akbayan, Magdalo, Aksyon Demokratiko, Tindig Pilipinas, and other cause-oriented groups.

In the September 1-7 Pulse Asia survey, Macalintal obtained a voter preference of 1.3 percent and placed 45th to 63rd in the ranking.

His senatorial bid has been endorsed by Batangas Rep. Vilma Santos. /cbb