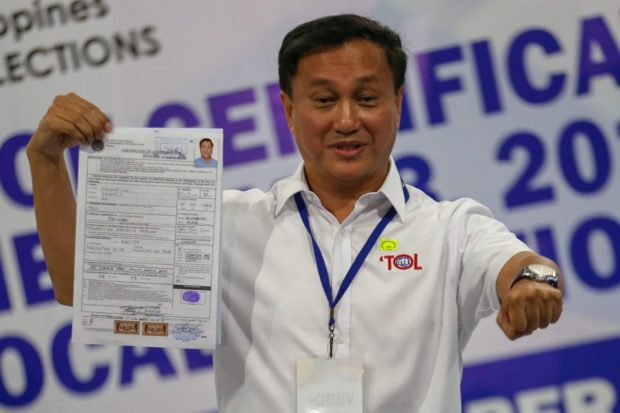 Presidential Adviser Francis Tolentino filed his certificate of candidacy (COC) as senator before the Commission on Elections (Comelec) headquarters on Wednesday.

Tolentino also ran but lost in the 2016 senatorial race.

In filing his COC, Tolentino mentioned his defeat to Senator Leila de Lima in the previous elections, reiterating that there were irregularities in the counting of votes. Tolentino placed 13th in the senatorial race, while De Lima placed 12th.

“Kung hindi nagkadayaan, baka number 11 ako eh (If no cheating happened, I would have placed 11th),” he said in a press briefing.

If he wins in the 2019 polls, he said he wouldn’t mind working with De Lima, who is detained at the PNP Custodial Center in Camp Crame in Quezon City over drug charges.

“Wala namang problema ‘yon (I don’t have a problem with that),” he said. “It will be a composition of lively and constructive debates.”

Tolentino, however, took a swipe at the drug charges filed against the senator.

“Nakakulong pa siya, ‘di ba (She is still in jail, right)? I don’t know how she will deal with drug cases she has to deal with,” he said.

Tolentino said he would push for measures to address disaster preparedness, as he lamented the recent landslides in Itogon in Benguet and Naga City in Cebu, brought by typhoon “Ompong (international name: Mangkhut).”

He will run next year under the banner of Partido Demokratiko Pilipino-Lakas ng Bayan (PDP-Laban). /cbb