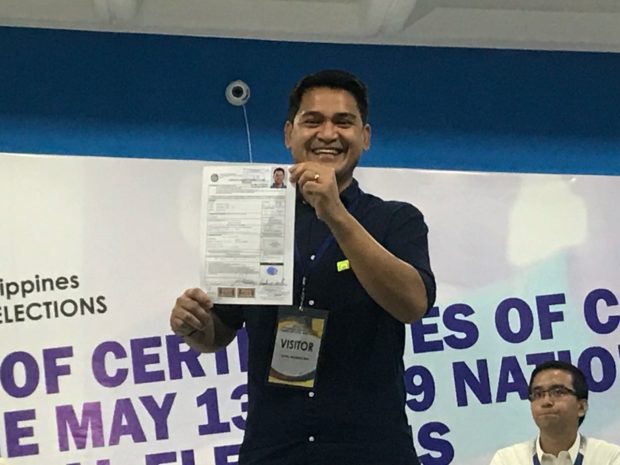 After his 23-year stint as a television anchor, journalist Jiggy Manicad is now eyeing a seat at the Senate in the 2019 polls.

He filed on Wednesday his certificate of candidacy (COC) for senator before the Commission on Elections (Comelec) in Manila.

Although lacking political background to vie for a national post, Manicad said his experience in journalism exposed him to the pressing problems of the country.

“Bilang journalist, bago ako sa politika, pero hindi ako bago sa mga problema ng bayan (As a journalist I am new in politics, but I am not new to the problems of the country),” he said in a press briefing.

If he wins a seat at the Senate, he said he would push for measures to lower the prices of petroleum products in the market, and those that deal with food shortage and human trafficking in the country.

He also said he would propose a “culture hour” on national television, which he said would show cultural programs that promote nationalism instead of soap operas.

He said he already resigned from his media network.

Asked how he felt to face his former colleagues in the media in a press briefing, this time as an interviewee, Manicad said he felt like someone preparing for a wedding.

(To be honest, I feel like I am getting married. This is how marriage feels like. You can’t sleep at night. You am nervous. I don’t know how to address you. You might say, ‘He already talks like a politician.’)

Manicad will run as an independent candidate, despite earlier reports that he was being eyed by the ruling Partido Demokratiko Pilipino-Lakas ng Bayan on its senatorial slate.

He said, however, that he was one of the senatorial bets of the presidential daughter and Davao City Mayor Sara Duterte’s Hugpong ng Pagbabago party. /cbb