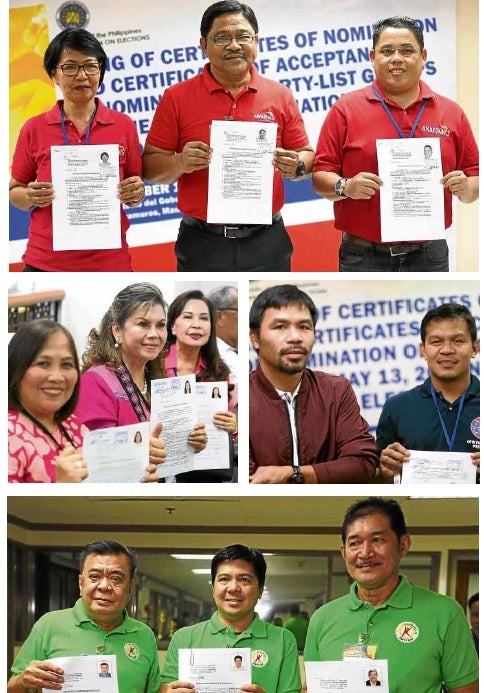 PARTY-LIST NOMINATION Among those who trooped to the main office of the Commission on Elections on Tuesday to file nominations of their party-list groups are, (top, from left) Cathy Estabillo, Rafael Mariano and Ariel Casilao of Anakpawis; Gina de Venecia and other nominees of Inang Bayan; Bobby Pacquiao of OFW Family Club, who is accompanied by his brother, Sen. Manny Pacquiao; and Emmanuel Andal, former Rep. Michael Defensor and Adorlito Ginete of Anakalusugan. —EDWIN BACASMAS AND MARIANNE BERMUDEZ

Since Oct. 11, the session hall of the Commission on Elections (Comelec) on the eighth floor of the Palacio del Gobernador in Intramuros, Manila, has been bustling with party-list nominees trying to beat the Oct. 17 deadline for filing their groups’ certificates of candidacy as advocates of marginalized groups.

That is also where the party-list system, which was intended to give voice to the voiceless, gets “bastardized,” according to Ferdinand Gaite of the government workers’ group, Courage.

“There are so many candidates vying for party-list positions who are not genuinely representing the sectors they claim to represent,” said Gaite, who is running as second nominee of Bayan Muna. “It’s [now] an entry point for those who have no district representation to enter Congress.”

He said the system had been used by members of political dynasties and the elite, who, in their desire to grab congressional seats, usurped positions reserved for the poor and underrepresented sectors.

“There are so many wealthy people who have gotten into the party-list system. It’s true that the system has been bastardized. Political dynasties, questionable representatives have seized what was already a tiny representation of just 20 percent (of the House of Representatives),” he said.

Instead of the political novices and unknowns, the familiar faces of former politicians, their children, wives and relatives, prominent figures like businessmen and ex-Cabinet secretaries and politicians accompanying party-list nominees dominated the crowd in the Comelec’s eighth floor session hall.

One of them was former boxer Bobby Pacquiao, who is running as representative of the OFW Family Club. His brother, Sen. Manny Pacquiao, came along to show support.

There was former Speaker Sonny Belmonte, who accompanied nominees of Serbisyo sa Bayan, and Cavite Gov. Strike Revilla, who arrived with nominees of 1-Pacman.

1-Pacman Rep. Michael Romero was last year’s richest congressman, with a net worth of P7.29 billion. He is the party’s first nominee again.

“What is happening right now is a mockery of the [party-list] system,” said former Comelec Chair Sixto Brillantes.

The Comelec has a duty to ensure that only those who deserve to run should be given space on the ballot, he said.

He cited former Assistant Presidential Communication Secretary Mocha Uson and and former presidential spokesperson Harry Roque, who, in their desire to get into Congress, are running as party-list nominees.

Ironically, Brillantes was in the session hall on Tuesday accompanying former Rep. Gina de Venecia, wife of former House Speaker Jose de Venecia and the first nominee of Inang Mahal, a recently formed party-list group that has yet to get Comelec accreditation.

Brillantes defended De Venecia, who, he said, was unlike other nominees and has continued to serve the women sector.

For many nominees, it seems “delicadeza,” or propriety, is not an issue.

Ernani Calica, first nominee of Tribal Communities Association of the Philippines, said the rich should run in the regular polls.

“If they have enough money and resources, they should run in the normal elections,” Calica said.

Calica said many of those in Congress who claim to represent marginalized sectors had done nothing to serve them.

So, when the party-list system turns into a “trapo” (traditional politics) institution, how can it be returned to genuine sectoral representation that it was supposed to stand for? Gaite and Brillantes believe legislation is the key.

Gaite said it was the Supreme Court that “waterdowned its essence.”

Both Gaite and Brillantes believe that Congress should to pass a new law defining the parameters for party-list groups.

Farmer Honorio Samiengo of Kaisahan ng Maliliit na Magsasaka could only wish for the country’s party-list system to genuinely serve its purpose.

“The big parties have their own party-list [groups] that are not marginalized. I believe the genuine party-lists would have difficulty winning because those groups have the money,” he said.

Outside the Palacio del Gobernador, supporters of party-list groups accompanied their nominees in rambunctious revelry, beating drums, singing hymns, dancing and giving speeches as they tried to grab the attention of the public and the media.

One popular former party-list nominee, Rafael Mariano, whose appointment as agrarian reform secretary in President Duterte’s administration was rejected by the Commission on Appointments, is again running as second nominee of the left-wing Anakpawis party-list group.

“From the beginning we have always fought for the advocacies of farmers, workers, urban poor as we fought for democratic, civil, political, economic and cultural rights for the masses,” Mariano, said.

The Guardians, which traces its origins to the “Diablo Squad” fraternity of Mindanao-based soldiers in the late 70s, has been fielding party-list candidates in past elections. It supports the Duterte administration.

If his group wins a seat, Alfonso said he would push for the establishment of a state-owned bank that would provide capital, with little interest and no collateral, to small vendors, sellers and entrepreneurs in the country. —With a report from Jerome Aning