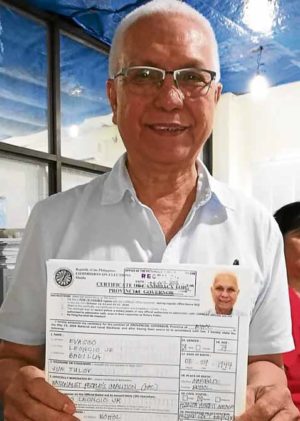 GUBERNATORIAL CANDIDATE Leoncio Evasco Jr.,who resigned on Tuesday as Cabinet secretary, is running for governor of Bohol, his home province. He filed his certificate of candidacy on Tuesday in Tagbilaran City. —LEO UDTOHAN

Evasco followed Foreign Secretary Alan Peter Cayetano, Special Assistant to the President Christopher Lawrence “Bong” Go and presidential spokesperson Harry Roque, who had all resigned to stand for the Duterte administration in its first electoral test.

Cayetano, who is running for the seat of Taguig City in the House of Representatives, would be replaced on Wednesday by former Philippine Permanent Representative to the United Nations Teodoro Locsin Jr.

Go left on Monday to run for the Senate, followed on Tuesday by Roque, who would try to return to the House of Representatives through the party-list elections.

Roque had angled for a spot on the administration’s senatorial ticket, but he stepped aside after being told by Mr. Duterte that he could not win the race.

Agrarian Reform Secretary John Castriciones told reporters on Tuesday that he had turned down offers of a slot on the administration’s senatorial slate.

Castriciones said he preferred to stay at his post to sustain programs launched during his six-month-old tenure.

He said he had conveyed his decision to the President through Go but had yet to receive a response.

Evasco registered for the gubernatorial race in Bohol at the Commission on Elections (Comelec) office in the island province on Tuesday morning.

He is running as a candidate of the Nationalist People’s Coalition, his party since 1991.

Evasco expects to run against two-term Rep. Arthur Yap of Bohol’s third district, a Duterte supporter who has yet to register as a candidate.

He said earlier, however, that President Duterte had promised to campaign for him.

Presidential spokesperson Salvador Panelo, who had taken the place of Roque, said on Tuesday that the President had not yet chosen replacements for the resigned officials, except for Locsin, who tweeted last week that he had accepted the President’s offer to replace Cayetano at the Department of Foreign Affairs.

“There is no announcement yet [about who will replace the resigned officials], but there are officers in charge,” Panelo told reporters.

Panelo, also the chief presidential legal counsel, gave assurance that the President would not use government resources to ensure his candidates’ electoral victory.

The assurance came a day after the President accompanied Go to the Comelec’s main office in Intramuros, Manila, where his longtime aide filed his COC for senator.

“You must remember that the President, as a citizen of this country, has the right to endorse [and help candidates]. But definitely the government will not spend anything,” Panelo said.

He said Go was receiving financial support from Mr. Duterte’s supporters who believed in Go’s “talents.”

Earlier, the President said Go was capable of financing his campaign.

Asked whether the President’s endorsement of his candidates in speeches on state-run radio and television was not using government resources, Panelo said no.

“That’s in the course of the speech so that’s nothing. All previous Presidents did that, too. What is bad is if you will be really spending [government money],” he said. —With reports from Dona Z. Pazzibugan, Melvin Gascon and Leo Udtohan