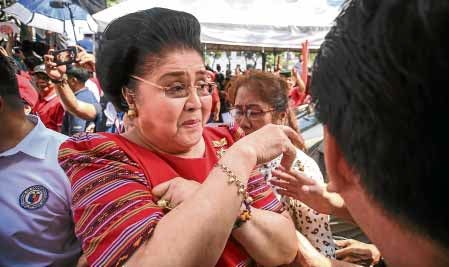 GRANDMA-GRANDSON TANDEM Eighty-nine-year-old Imelda Marcos, former first lady and widow of dictator Ferdinand Marcos, is running for governor of Ilocos Norte. Her grandson will be her running mate. —EARVIN PERIAS

LAOAG CITY — Former first lady Imelda Marcos is seeking the gubernatorial post held since 2010 by her daughter, Imee, who is running for senator in next year’s midterm elections.

The 89-year-old widow of dictator Ferdinand Marcos, who is serving as representative of the second district of Ilocos Norte province, was expected to file her certificate of candidacy (COC) by proxy on Tuesday or Wednesday.

Running with her for vice governor is her grandson, Matthew Manotoc, the youngest of Imee’s three sons.

Manotoc, a sports aficionado like his father, Tommy Manotoc, won his first term as senior provincial board member in the 2016 polls.

Rep. Rodolfo Fariñas (first district), a former ally of the Marcos family, said he might retire from politics. His daughter, Board Member Ria Fariñas, has filed her candidacy to take his seat.

“But if my rivals make someone contest Ria’s candidacy, I may end up running for governor,” said Fariñas, who had a falling out with the Marcoses when he initiated a 2017 congressional inquiry into Imee’s alleged misuse of the province’s share of the tobacco taxes.

His youngest son, Rodolfo Christian Fariñas II, is running for a seat in the provincial board after losing in the recent barangay election. —Leilanie Adriano