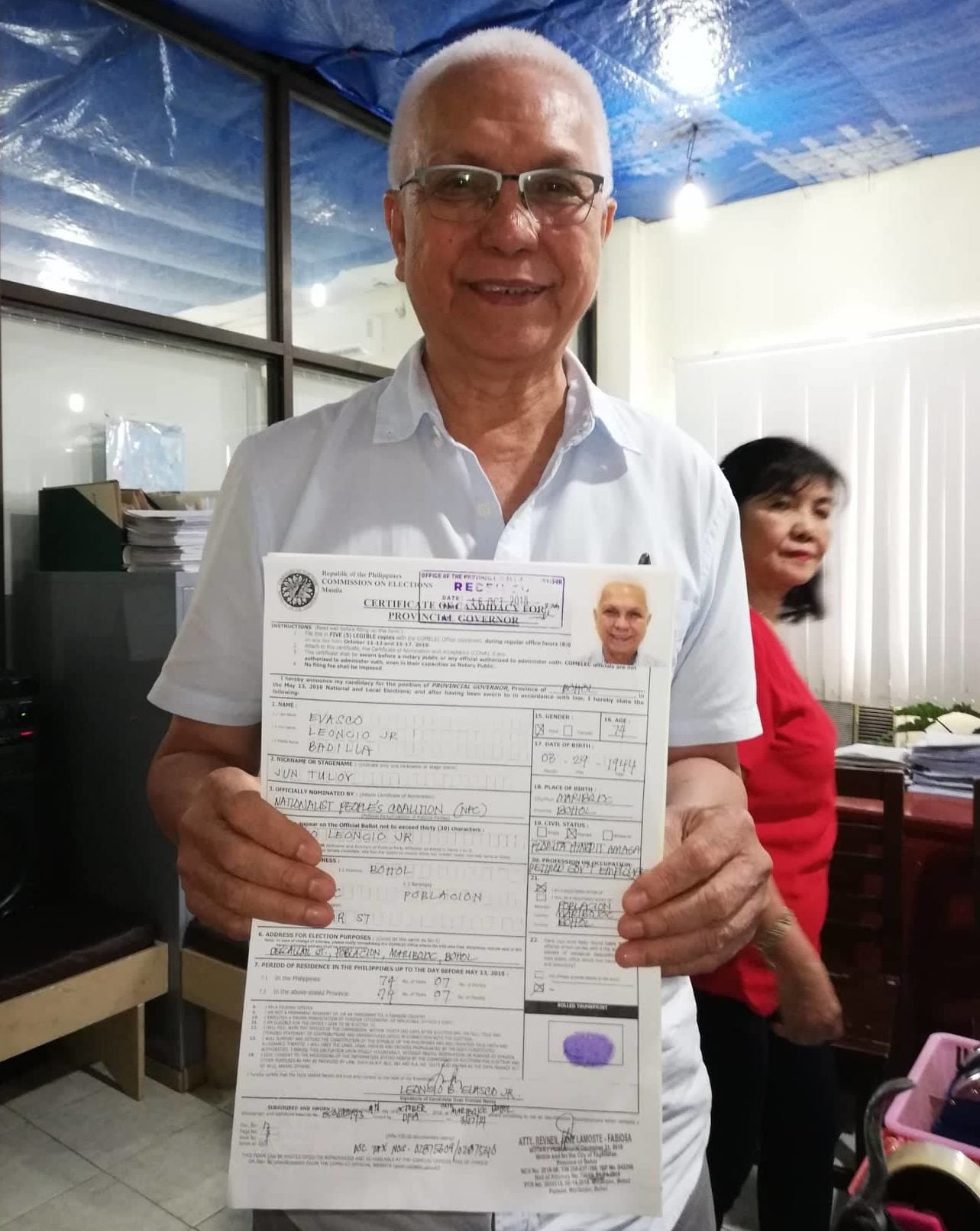 He was joined by his family and some supporters who are mostly members of the Alyansang Bol-anon Alang sa Kausaban (Abaka) movement when he went to Commission on Elections (Comelec) provincial office here, just a few minutes after the poll office opened its door at 8 a.m.

Evasco filed his COC for governor under the Nationalist People’s Coalition (NPC), his party since 1991.

Evasco admitted that the gubernatorial race would not be easy since he would be facing outgoing Rep. Arthur Yap of Bohol’s 3rd district.

Yap has not yet filed his COC.

“I decided to run after a long contemplation,” Evasco said in a phone interview.

He said President Rodrigo Duterte was aware that he would be running.

“I have already talked to the President,” he said, saying the President was smiling when he told him about his plans.

He said Duterte assured him that “I will campaign for you.”

He said he is deemed resigned from the Cabinet after he filed his COC.

“The moment I filed my COC that is an automatic reignation but I have to submit my official resignation,” he said.

In a statement, Evasco said he went back to politics to end “partisan politics” in Bohol.

The former rebel-priest previously served a as a Maribojoc town mayor in Bohol before joining the Cabinet of President Rodrigo Duterte.

He lamented that when a magnitude 7.2 earthquake jolted Bohol in 2013, his town did not receive a “fair share of the relief and the rehabilitation package” because he was not aligned with the administration party.

“And that experience gave me a strong resolve that if one day, I will lead this province, partisan politics will end on election day,” he said.

“We will take the higher fora, ground to push for meaningful change and equitable development for the island we hold dear in our hearts,” he added.

After serving the Cabinet for more than two years, he said he would continue to “be a partner of [the Duterte] administration and will carry the same fervor and integrity” in serving Bohol.

He thanked the President for the ‘trust and confidence he has given me for the past 30 years that I have worked with him in different hats.”  /cbb/muf