WATCH: Binay siblings: To each his own style of governance | Inquirer News
Close
menu
search

WATCH: Binay siblings: To each his own style of governance 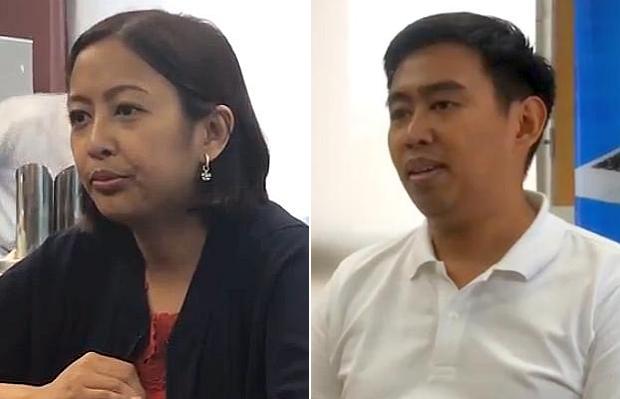 [VIDEOS OF INTERVIEW WITH BOTH BINAYS BELOW]

The Binay siblings – Jejomar Erwin Jr., or Junjun, and Abigail, or Abby – have different styles of leadership, and each of them is hoping to apply his or her particular leadership style in Makati, where they will run against each other for the mayoral seat in the 2019 elections.

“We are apples and oranges. You cannot compare him and me there are differences in styles,” Abby said in an interview with Inquirer last Thursday, Oct. 11.

Junjun was served as city mayor for two terms from 2010 to 2015, but his second term was cut short due to pending corruption cases.

Elder sister Abby replaced him in 2016.

In a separate interview, Junjun pointed out that Makati citizens would want the “Binay brand” of governance, which required directly approaching the people. According to him, this is the style that he shares with his father, former Vice President Jejomar Binay, who also served as Makati mayor for six terms.

[We should be directly go to the people. They do not need to come to us and this will be a strength. I value my relationships. I will be the one who will go down to the people.]

Junjun said his style contrasted with his sister’s, who he said did not “really go down to people and talk to them.”

Still Abby insisted that during her term she was able to heed to the citizens’ basic needs through “caravan” projects.

[We listen. So you can’t say that we don’t going go down to the people. The caravan that was instituted during my administration runs every Saturday. We go to every barangay. All of those services are free — medical, dental, haircut and legal advice.

Abby also said her administration was able to put up satellite offices for people to have easy access to the city government.

“We have now satellite offices so they don’t have to go to city hall,” she said.

Asked about his advantage in the elections, Junjun said he had more experience in government than his sister.

“I have proven myself,” he said. “I have been in the government for many years. I started as a youth leader as part of Sangguniang Kabataan and I have won twice as mayor of the city.”

If re-elected as mayor, Junjun said he would build new schools in Makati.

“This population is growing. I have not seen a new school built for our children,” he said. “Kailangan nating i-expand yan.”

[This population is growing. I have not seen a new school built for our children. We need to expand it.]

His administration, he said, was also able to support the funding for the K-to-12 program.

[We are the only local government unit that funded the K-to-12 program to keep it going. Thousands of K-to-12 enrollees have already enrolled in the University of Makati.]

The miscommunication between the siblings worsened after a specific family agreement that her sister would only serve for one term.

“Di ba dapat ikaw mag-give way yung kapatid mo nag-sakripisyo in 2016 for the family given that agreement,” he said.

[Isn’t it that it’s your sister who should give way to the sibling who already sacrificed in 2016 for the family, given that agreement.]

But, Abby denied they had such an agreement, noting that she implemented reforms as the incumbent city mayor.

[Nobody reminded me that there was an agreement when we decided that I would run for mayor in 2016.]

“Why would I institute changes? Why would I make hard decisions that are unpopular but right? Why would I fix the system?” she said, pointin out that she could not have implemented reforms if she had known she could only serve for one term.

According to Junjun, he has not talked to Abby for a long time, as her sister has not been joining the family’s “regular Sunday lunch or dinner.”

Comelec will have to decide

With administrative cases hampering Junjun, Abby said the Commission on Elections (Comelec) would have to decide whether it would allow her brother to run for mayor.

“Junjun can file because it is ministerial for Comelec to accept it,” Abby said. “But Comelec will have to decide if his name will be part of the ballot.”

Comelec spokesperson James Jimenez said the commission would have to evaluate the circumstances of Junjun’s disqualification as only political aspirants with “final conviction” on cases could be barred from running for elections.

READ: Junjun Binay can run for office if no final conviction in cases—Comelec

Meanwhile, Junjun insisted that he could still run because there was still “no final judgment on the case and only the Supreme Court can render the case.”

Junjun was suspended and later dismissed in June 2015 by the Office of the Ombudsman as he was linked to the alleged overpricing of the new Makati Science High School Building.

In May 2016, the Court of Appeals dismissed the administrative cases filed against Junjun. /atm