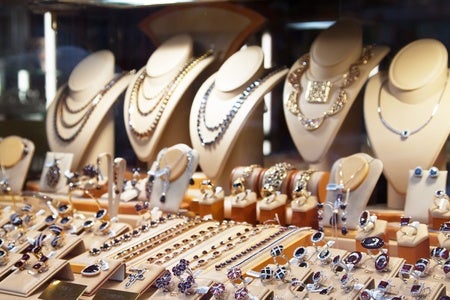 About 6 million yuan (US$866,000) worth of jewelry was stolen in a store in Laibin city, Guangxi, in China—an incident that initially perplexed its store owner.

The jewelry store is guarded by security every night and showed no signs of forced entry when the jewels were stolen. As per The South China Morning Post on Oct. 11, what was only unusual was when the surveillance cameras went out around 3 a.m.

It was reported that employees of the store discovered the robbery in the morning of Sept. 5, with a huge number of the store’s gold and platinum bracelets and necklaces missing.

“Every night we have guards from a security company at the door, and the lights are kept on inside the store,” the store owner, identified as Wang, was quoted as saying.

A hole in the store’s floor was discovered, giving a lead to the mystery. Authorities have since uncovered that the heist was carried out by a Fujian man who was arrested on Sept. 20. As per the report, Ye Jiangyun is a construction worker who arrived in Guangxi after his tile business failed.

Ye allegedly shifted his focus to the Zhou Liu Fu jewelry store, however, when he figured the plaza’s basement gave him an easy access point to the store. He was accused of tunneling for eight straight days using just a hammer, electric cutter, tongs and a flashlight as he went through the establishment’s ducts.

After stealing the jewels, Ye was caught on surveillance taking a car from Guangxi to Fuzhou where he was eventually arrested by authorities two weeks after.

Ye has since been charged of stealing over 9 kilograms of gold and half a kilogram of platinum jewelry, and awaits prosecution. Meanwhile, it is unknown whether any of the jewelry has been recovered and returned to the store. Cody Cepeda /ra