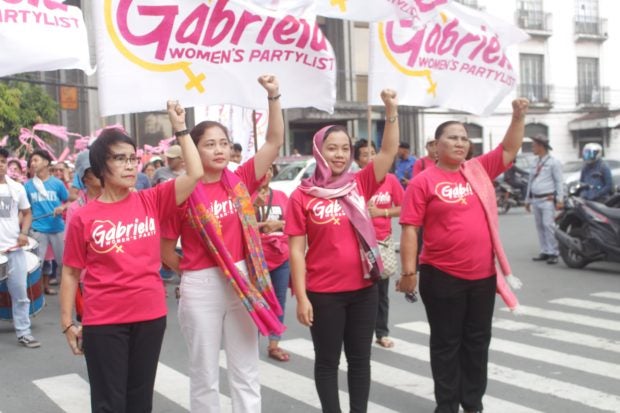 Supporters of former police chief and senatorial candidate Ronald “Bato” dela Rosa and the Gabriela Women’s Partylist engaged in a shouting match during the filing of certificates of candidacy at the Commission on Elections (Comelec) on Friday.

While it was unclear who started the arguments, protesters from Gabriela positioned in front of the Comelec headquarters in Intramuros, Manila shouted “berdugo” (executioner) at Dela Rosa, who was being interviewed.

In response, Dela Rosa’s supporters cheered for the former PNP chief and shouted his and President Rodrigo Duterte’s name to drown out the shouts of the other camp.  Officials of both groups pacified the situation afterwards to avoid any further commotion.

Gabriela members, who are staunch critics of the Duterte administration, was referring to Dela Rosa’s role as chief of the Philippine National Police (PNP). Dela Rosa is currently the Director General of the Bureau of Corrections.

With him at the helm of the police force, the government implemented Oplan Tokhang or the war against illegal drugs — a move that garnered criticisms from local and international groups.

Recent PNP data show that 4,800 have been killed in legitimate police operations, but opposition parties have said that the number ranges from 12,000 to 20,000.

Dela Rosa is running under the Partido Demokratiko Pilipino – Laban ng Bayan (PDP-Laban), while Gabriela, a member of the House of Representatives’ Makabayan bloc, will field three candidates for the 2019 midterm elections. /je